∞
[view]
The Barb Shuriken (暗殺手裏剣 Ansatsu shuriken, lit. Assassination Shuriken) is a Shuriken that is introduced in Fire Emblem Fates. Like its Japanese name suggests, the Barb Shuriken specialises in the delivery of lethal critical attacks, imbued with a high Critical rate and inflicting four times the amount of standard damage instead of three times when critical attacks are triggered.

The Barb Shuriken also imbues its wielder with a bonus of 2 Speed, alongside reducing the Luck, Defense and Resistance of enemy units by a fair amount post-battle.

This weapon is analogous with the Killing Edge, Killer Lance, Killer Axe, Killer Bow and the Fates incarnation of Mjolnir.

The shuriken (手裏剣) was a common throwing weapon for ninja, and its name can mean "sword hidden in the hand", or "the sword inside of hand". They came in a variety of shapes, from flattened blades to the popular star shape. 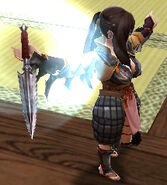