Fighter (As a Mirage Master in Encore)

Yuichi Nakamura
[view]
“You're not gonna get any rest, rookies!”

Barry is a thirty-five year old retired musician that moved to Japan and currently works as a trainer and scout for Fortuna Entertainment, for three years now. Before the events of the game he was a Mirage Master himself and Draug's partner, but during a battle with a particularly tough Mirage he sacrificed all he had and lost his Mirage, succumbing to a deep depression afterwards. Although he is no Mirage Master, he can assist the party with Backup Skills, and in Encore he can assist in Session Attacks.

During Chapter 3: The Next Generation, Barry was captured and under control of the corrupted Draug. He managed to break free of Draug temporarily thanks to Mamori's singing just before Itsuki separated Barry's Performa from corrupted Draug. After Draug is defeated by Itsuki and the others, Barry encourages Mamori to purify Draug with her newly awakened Performa and become his partner.

His birthday is February 20.

Barry is a comically excitable and intense person attracted to Japan's otaku culture. Because he is not originally from Japan, he occasionally makes outbursts in English. He is a fan of the anime Dia Witch Iroha, which in the game's universe is a show marketed toward girls. He has a noted appreciation for Mamori Minamoto.

Despite this he takes his work very seriously and demands the best from the new recruits. As such, he can often be both overbearing in his sessions, but expects great things out of his trainees.

Barry Goodman - Trainer/Fanboy
Barry continued to work hard as a trainer, but he also wrote doujinshi and fan works on the side. The manga he drew soon become a cult classic and was picked up by a publisher for a serialization. His fans note that the heroine bears a striking resemblances to Mamori Minamoto.

Barry Goodman - Mamori-maniac
Although he was an independent contractor, Barry eventually went Fortuna-exclusive. In the many interviews of Fortuna's talent and stars, Barry's powerful personality and bombastic past would invariably come up in conversation. Barry can still be heard passionately roaring encouragement for his students... sometimes from a couple blocks away.

Barry Goodman - Drill Sergeant
As Fortuna grew in fame, more outside requests came demanding Barry's expert tutelage. He earned the trust of many artists, and became known as a charismatic and passionate trainer. His problem now is that his rewarding career is getting in the way of his anime and video games.

Barry Goodman - Shredding Again
After composing his song for Mamori, Barry returned to his music career. This news reached his former bandmates across the sea, and they try to convince him to reclaim his death metal crown. Barry opts instead to rebuild the renowned "TERADETH" into an incredible anime music group.

Barry Goodman is illustrated in the trading card game Fire Emblem Cipher with the following cards: 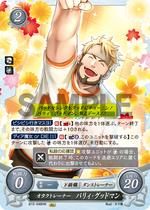