Chapter 5: Liberation of Grust (New Mystery of the Emblem)

DC Douglas
[view]
“I got nothing to do with fighting now... Well, that's what I would say if you were anyone else.”
—Barst's recruitment in New Mystery of the Emblem

Barst is a playable character from the Archanea Series of Fire Emblem. In Shadow Dragon and the Blade of Light, Barst, alongside Bord and Cord, is a member of the Talysian mercenary group that is spearheaded by Ogma.

Barst makes his first appearance in Chapter 2 of Shadow Dragon and the Blade of Light, where he, alongside Ogma, Bord and Cord, enlists in Marth's army under the behest of Princess Caeda of Talys. Barst then aids Marth in bringing the War of Shadows to a conclusion, before returning to Talys to become a woodcutter. Some time later, according to Ogma, Barst departs in order to enlist in the Archanean army, before retiring shortly afterwards to become a pirate, the result of having tired of warfare.

According to his ending, Barst does not appear at all in the original Book 2. Owing to the fact that he did enlist himself in the ranks of the Archanean army, but then deserted to become a pirate. It could be hinted that he continued living his new life as a pirate during the time the War of Heroes took place, making him unable to take part in it.

Barst returns in Chapter 5 of New Mystery of the Emblem, where he is revealed to have taken up residence near Olbern Keep in the country of Grust, leading a peaceful life as a woodcutter. Initially appearing as an enemy unit, Barst will join Marth's army when spoken to by Ogma, Bord or Cord, in spite of his initial unwillingness to involve himself in the chaos of warfare. Barst will then assist Marth in bringing the War of Heroes to a conclusion, before vanishing without a word to anyone. He is rumoured to either have returned to leading a life as a simple woodcutter or taken to the high seas as a pirate, once again.

As is the case with a majority of the cast appearing in Shadow Dragon and the Blade of Light and Mystery of the Emblem, Barst's character is not well-developed, owing to the minor role that he plays. Based on the few interactions that he engages in, however, one can still deduce various points of his personality. For one, it can be observed that Barst is a rather indecisive individual, unable to craft solid directions to follow in his life; the end of the War of Darkness sees him constantly switching from one occupation to another rather rapidly, never seeming to gain any satisfaction from any of them. Through his recruitment conversations with either Bord or Cord in Mystery of the Emblem, his indecisiveness can be attributed to his dislike of the chaos of fighting, instead desiring to lead a peaceful life.

In spite of this, one can tell that Barst is a steadfastly loyal individual, regarding the bonds that he forges with others with a keen earnestness. This is the case with the subordinate-leader relationship that he shares with Ogma; upon being requested to aid Marth's army in the War of Heroes by his former captain, Barst readily agrees to do so with barely any sign of hesitation.

In his relationship with his two brothers, Barst cares about their sense of lifestyle. In his support with Kris, he tell him/her that his brothers have been living in the mercenary business for too long, which one can point out that he wishes for the best of both of them in finding something that can benefit their lives peacefully after the war concludes. Barst's indecisiveness in switching occupations from one to another and his dislike of violence is something he hopes to set as an example for his brothers in motivating them to live a peaceful life rather than being mercenaries for hire. When the War of Heroes came to an end, while not shown, it could be hinted that Barst managed to convince Cord, at the very least, as Cord's ending states that he managed to settle down as a woodcutter and preferred that life than the ravages of war.

Barst is a fine example of a good character stuck in a terrible class. As a Fighter, he is locked to wielding axes, which are the heaviest weapon type, fairly uncommon past the early chapters, and lack particularly strong options aside from the notoriously unreliable Devil Axe. In fact, he will have 0 Speed when fighting with either of his starting weapons. He also cannot promote, which means he has only fifteen levels of growth to work with, and lacks the promotion gains that would patch his issues (compared to characters like Ogma and Navarre, who can gain Movement and Hero stat bases). That said, Barst has an excellent base Strength of 10 and a Speed of 9, along with high 50% growths in multiple stats, which makes him by far the most usable of the four axe-users in the game. He can double most enemies with an Iron Axe at base level, and needs only one point of Speed to double with Steel or Hand Axes. His high stats and attacking power make him one of the stronger characters in the early game, but after that point, he will likely fall off unless given favoritism once other characters have caught up to his stat lead.

Though Barst's growths have taken some hits, his bases remain as good as ever, and he has benefited massively from the buffs to the Fighter class. His high Strength now counterbalances the weight of his axes, turning him into a surprisingly fast unit, and while his growths are not high, they are more than sufficient to carry him. In addition, when Barst joins, he already has a D-rank in Axes, allowing him to have a greater versatility by using D-ranked Axes from the get-go. Compared to Bord and Cord, both of which join at the same time, Barst has higher base stats and high enough of a weapon level to use an array of Axes early in the game without sacrificing significantly in either his skill or speed growth rates. Lastly, if Barst's axe rank is raised to C, he will be able to wield a forged Hammer, or even a forged Poleaxe in the lategame, which will allow him to one-round even the strongest armored and mounted enemies. All of these strengths combined means that, more often than not, Barst will be the premier choice for an axe-user throughout the game, and one of the best choices for a frontline unit in general. The weapon triangle is a major boon to Barst, as well; Shadow Dragon's maps are notoriously lance-heavy, which makes a strong axe-wielder a very good thing to have at the ready. On higher difficulties, where most enemies have A-class weapon ranks and therefore a noticeable buff to their offense, Barst's ability to shut their ranks down gives him a sizeable durability boost next to his fellows.

When Barst promotes, he likely will already have a high HP and strength stat, which will give him a greater number of options to reclass into once he promotes. Aside from the Warrior class, Barst can reclass into a Berserker, which has the same growth rates as the Warrior class but allows Barst to cross water and mountains, though given Barst is unlikely to cap such a speed cap, which is the premier feature of the Berserker class, he may not prove to excel as a Berserker unless he is manually given multiple Speedwings. An alternate reclassing option is Hero; assuming Barst's strength stat is not below average by the time he promotes, he can reclass into the Hero class and have a much higher skill and speed by default, while benefiting from having already built his weapon levels in axes up by a fair amount. This makes Hero generally Barst's best option, as its fairly massive Speed boost will make him an extremely strong frontline option, albeit one that sacrifices his Strength growth somewhat. Even with bad growths, though, Barst's base Strength is high enough to make going Hero a viable option.

Barst is a fairly workable unit in New Mystery, but not a spectacular one. His growths and bases have both been buffed, but the early cast of New Mystery as a whole is far stronger, making a pure combat unit like Barst less notable. He is one of the few characters (barring certain versions of Kris) to boast any kind of axe rank, but his D-rank is generally not standout enough to give him a niche. That said, his bases are high enough that he at least avoids being doubled, even on Lunatic, and he has access to steel and hand axes, letting him hit hard or at range, letting him function as a serviceable combat unit. He is by far the best of the three early Fighters, but still not a particularly remarkable one, barring the limited utility of their Triangle Attack.

The Hatchet
Warrior of Talys who works for Ogma and has been a pirate and woodcutter. Appears in Fire Emblem: Mystery of the Emblem.

Talys Brave
He joined the Archanea army, but later abandoned his post. It is rumoured that he became a pirate…

The Hatchet
Barst briefly enlisted in the Archanean army, but later deserted- to become a pirate, by some accounts.

The Hatchet
Barst vanished, rather than go to Talys. Stories tell of him being a woodcutter, or sailing the high seas to a distant land.

Barst is illustrated in the trading card game with the following card: 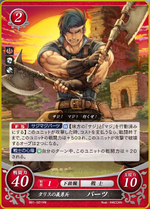 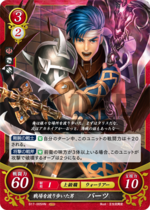 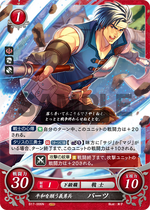