For the Fire Emblem: The Binding Blade character, see here.
For the similarly named pirate from the same game, see Garth.

Brigand
[view]
“Gar har har! I'll do no such thing, ye shrill woman! No one enters the lair of the Pirate King and starts squawkin' orders but me!”
—Barth talking to Celica in Echoes

Barth is an enemy boss character in Fire Emblem Gaiden. He is responsible for the death of Valbar's family. It is implied that he, along with the bandits and Grieth Pirates are subordinates of Grieth. 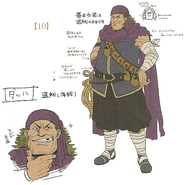 Concept artwork of Barth from Echoes: Shadows of Valentia. 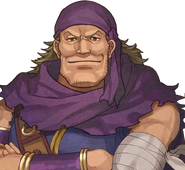 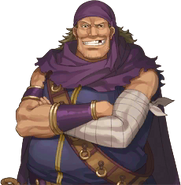 Barth's portrait in Shadows of Valentia.