Knight
[view]
“Show the enemy...why they should fear the knights of Ostia!”
—Barthe to Gwendolyn in a support conversation

Barthe is a playable character from Fire Emblem: The Binding Blade. Barthe is a well respected and well revered knight of Ostia, acting as a mentor to new recruits. Barthe has possibly been employed the longest out of all of Ostia's knights. Barthe, although not related to Gwendolyn or Bors, has the ability to use the Triangle Attack with them. After the war, he rebuilt Ostia's army.

He makes a brief cameo appearance in chapter 18 of the Fire Emblem: Hasha no Tsurugi manga.

Barthe is a part of the Ostian Armor Knights, a notably strong sector of Ostia's military. Barthe was knighted around the same time as Bors, with the two becoming fast friends. At one point, they fought each other in a martial arts tournament, with Bors being the victor. Barthe is also well-acquainted with Astolfo, an Ostian spy, as well as Gwendolyn and Ogier, fellow members of the Ostian Armor Knights with the former being Bors's sister.

When a rebellion in Ostia headed by the well-respected general Leygance and a former lieutenant named Devias broke out, Barthe, along with Gwendolyn and Ogier, were apparently absent from Castle Ostia. They returned, however, to save Lilina, the daughter of the Marquess Hector, who had been imprisoned and used by the revolutionaries. Upon their arrival, they met up with Roy and his army, who were engaged in a battle with Leygance to stop the rebellion. Under Roy's command, they helped to defeat Leygance, ending the revolution, and saving Lilina. Afterwards, Barthe joined Roy's army on a journey to stop King Zephiel of Bern from eradicating the humans of Elibe, with Gwendolyn and Ogier also tagging along.

After the war, Barthe was placed in charge of the Ostian military, being described as a "strict but fair" leader.

Barthe is a very collected individual, and can appear cold in his opinions. Nonetheless, he is devoted to bettering himself, often challenging the local arena in the town of Ostia despite how life threatening it is. He has much in common with his fellow knights Bors and Astolfo, being devoted to Ostia's cause and disappointed with their failure to keep it's coup from happening, as well as failing to keep Hector alive. He's also very suspicious of many of the figures in Roy's army, and alongside Astolfo keeps tabs on everyone in it to the point of paranoia. Lastly, he is a mentor to Gwendolyn and Ogier, teaching more power-oriented lessons than Bors teaches.

While Barthe is not the worst unit in the game, he certainly gives a good showing at it, being a Knight and possessing low combat parameters. While Barth does possess both a decent base in Strength and nice base in lance rank, his pitiful base of 5 Speed means that he at base fails to double anything but 0-1 AS Soldiers and Knights and his Speed growth will inhibit him from getting much better. He also struggles to even hit his enemies upon joining, as he has low Skill and Luck. He joins right before the Western Isles, which are full of axe-wielding enemies which have Weapon Triangle advantage, undermining his good Defense. Past the Western Isles, he still has problems since maps keep getting larger in size, axe-wielding enemies get promoted and his low Speed keeps limiting his tanking capabilities since enemies double him easily.

Aside from Barth's Speed, his other stats barring Strength, Defense, and HP also suffer. He boasts the worst Resistance in the game, with a base of 1 and a bizarrely low growth of 2%. Combine that with his Speed, and Barthe is utterly unable to handle magic units, who will double him easily and cut through his sky-high Defense. Even enemies wielding siege tomes like Bolting can double him, which will either kill him or reduce him to the point of being finished off easily. Barth also has very low Luck, with a base of 2 and a growth of 20%, meaning he faces crit chance very frequently; while he still does not take much damage from common enemies, this means enemies that can damage him are increasingly likely to simply blow through him. His Skill is also quite poor, which does not play well with his weapon types, which are both inaccurate, and with the fact that he joins directly before the most axe-heavy portion of the game. Barth does have a high base level, which means he can be promoted quickly to buff up his stats, this means consuming the Knight Crest, one of the rarer promotion items in the game and one in stiff competition due to sharing it with Cavaliers.

Aside from suffering from the typical problems that the Knight class possesses (e.g. low movement), his CON is so high that his mobility problems cannot be circumvented with the Rescue command. For example, promoted Shanna cannot rescue him as a Knight, while unpromoted Sin is the only unit capable of rescuing him as a General, illustrating how difficult it is to move him around.

Barth does have one rather absurd utility in the form of the Triangle Attack. As the Triangle Attack always hits and always crits, it can allow him to bring his full might to bear while bypassing his normally lackluster accuracy. That said, as Bors and Gwendolyn are also notoriously difficult-to-use units, and all three have terrible mobility, this tends to be more of a joke strategy than anything.

All in all, Barthe is a unit that is very hard to use effectively. Though he has the highest potential Defense in the game, he pays for it in almost every other category, and suffers badly as a result.

Barthe - Knight of Justice (剛直なる重騎士 Gōchokunaru jū kishi)
"After returning home, Barthe was put in charge of the Ostian military. Although devastated from the tragedies of Hector's death and the rebellion, Barthe's strict but fair leadership led the Ostian Armor Knights to glory once again."

Barthe: Leygance, you miscreant! Have you no shame for your betrayal of Lord Hector?!

Leygance: Barthe... Shut your ugly mouth. Lord Hector was a fool. His death was his own doing. I do not intend to fall along with him.

Barthe is illustrated in the trading card game Fire Emblem Cipher with the following cards: 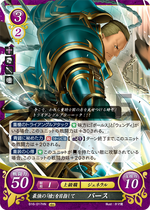 Artwork of Barthe, Gwendolyn, and Bors in Fire Emblem 0 (Cipher) by Homazo.

Barthe as a General in Fire Emblem 0 (Cipher).

Barthe's portrait in The Binding Blade.

Bathe's battle sprite in The Binding Blade as a General attacking with a Hand Axe.

Barthe performing a critical hit in The Binding Blade as a General with a Hand Axe.