Chapter 12: Birds of a Feather (Hector's story) (The Blazing Blade)
Chapter 11B: Escape to Freedom (The Binding Blade)

Kyle Hebert
[view]
“My body is powerful, but your body has brains. We might have different paths, but we both fight bravely.”
—Bartre talking to Canas in a support conversation.

He also appears in The Binding Blade as Karla's husband, Fir's father, and Karel's brother-in-law.

Bartre also supports with his daughter, Fir. In the A-Level conversation, he apologizes to her for not bringing her up well enough, and not being there when she needed him. Fir's tone implies that he can be a bit overprotective at times, but he just means to be by her side.

In The Blazing Blade, Bartre is shown to be very rash and reckless, but good-hearted. He also shows a lack of education; for example, he says "Hard words make my head hurt!" in a support conversation with Canas, and showing Raven a family tree so illegible that Raven could not even read it. Bartre often encourages rigorous exercise, and will encourage people to hit him as hard as they can.

Description: A warrior who cares deeply for his daughter.

Bartre has an odd mix of traits that make him a fairly viable, if somewhat limited unit. He joins with a monstrous 22 base Strength and 48 HP, along with A-rank Axes, likely making him one of the hardest-hitting units in the army at his join time. However, his 11 Skill is only average and doesn't tend to compensate for the somewhat low accuracy of axes, and his 10 Speed is on the low side; though he is unlikely to be doubled by anything barring Mercenaries, he will struggle to double anything faster than a Knight or General. Backing up his performance, though, he boasts bow use as a result of his Warrior class, and though he only possesses a D-rank, his Strength means he can at least deliver fairly serious chip damage, especially when bows patch up his accuracy. This makes him fairly helpful against sturdy fliers like Wyvern Riders; though he lacks the powerful weapons of Snipers like Klein or Igrene or the mobility of nomads like Sin, his bulk, Strength, and melee prowess can make up for it.

Generally, Bartre's growths limit him being used long-term, but he is far from unusable as a lategame pick. The Brave Axe patches up his Speed somewhat, as do Speedwings. Gaining one or two points of speed on his 30% growth should at least keep him out of being doubled. His main potential utility in the lategame, though, is Armads. Most other axe units lack the axe rank to easily use the weapon, such as Garret, need to be raised for long periods, such as Lot, or suffer from other issues, such as Gonzalez, making Bartre, who has a base A-rank, the character who has the easiest time of wielding the weapon (alongside his mutually-exclusive rival Echidna, who has a B-rank but can double more). An Armads-wielding Bartre, even without the ability to double, will be one of your hardest-hitting units for taking on Manaketes.

Relative to Echidna, Bartre fills a fairly similar role as a low-cost melee powerhouse and one of the best options for a midgame axe-wielder, though they do have positives and negatives. Echidna's main niches are her superior accuracy and damage output, due to her high Skill and Speed and her access to swords. Meanwhile, Bartre is far more durable, and has access to bows to take down fliers. The superior pick largely comes down to player preference.

On paper, Bartre looks like a fairly strong unit: his growths are fairly decent, most of his bases are high, and he has a great weapon type in axes. He also joins very early, and can use effective weapons like the Hammer and Halberd. With early free deployment, he has some of the highest damage at base of the unpromoted cast.

However, Bartre has one glaring issue that tends to doom him to the bench: his abysmal base Speed of 3. It is the lowest Speed of any combat unit; even Oswin is faster than Bartre at base. Some enemies on Hector Hard, such as mercenaries and cavaliers, can double Bartre outright, and while he's durable enough to survive a round of this, it does not bode well for his sustainability. Bartre's 40% Speed growth, though decent, is nowhere near enough to make up for his base unless he proves very lucky.

Worse, Bartre's promotion does not do much to aid him. While he is not the only character in Blazing Blade to have trouble doubling, most of them, such as Canas, Lowen, Oswin, or Heath can solve the issue by promoting, which will usually push their Speed over the right thresholds. Bartre cannot do this, as his Warrior class's promotion gains do not include Speed - hence, if Bartre is to double, he must rely on his growths, or expend high-demand statboosting items like Speedwings. The acquisition of low-rank bows also barely helps him, as his damage when using an axe against a flier is scarcely any lower.

Overall, while Bartre is not useless, he is very mediocre. Unless the player seeks to recruit every character (as a trained Bartre is required to recruit Karla), he can generally be left alone.

Fearless Warrior
An outpost warrior who went on a journey to find his beloved daughter, Fir. Appears in Fire Emblem: The Binding Blade.

Bartre remains true to his original self with monstrous Atk and HP and decent Def. Unfortunately his low Spd is a hindrance against dueling units, especially against common red threats. His Res is not any better as his magical bulk is near non-existent. Nevertheless, he is an easy to acquire unit that can smash a decent portion of potential opponents in battle. While he can take a few hits from blue and green physical units, Bartre is usually built to outright kill an opponent in a single blow.

Bartre began with a Hammer giving him a better dueling role against common armors like Effie, Fallen Hardin, and even Hector in some instances. He could later use the Weapon Refinery to change it into a Slaying Hammer, boosting the base might and, when further refined, could completely negate the visible buffs on an armor unit. He later received his own personal weapon, Axe of Virility, which is an even stronger armor slaying weapon, but with a Fury effect added on when refined. Thanks to this, Bartre can achieve an astounding physical might that can easily one-hit KO a lot of vulnerable units and becomes a veritable armor slaying machine in turn.

Bartre has Smite, allowing him to push an adjacent ally two spaces in the direction he is interacting with his ally. This is valuable for Aether Raids in particular to encroach the enemy. He is an innate Fury unit which does double stack its benefits on top of his weapon refine, leading to a neutral 58 Atk and 39 Def, which is beefy enough to withstand physical blows from blues and most bow, non-poison dagger users, and physical green units. However, his HP is quickly whittled down due to the damage recoil afterwards. Brash Assault addresses his low Spd by giving him a guaranteed follow-up attack so long as he is under 50% HP and his opponent can counter him. The HP threshold to activate is dangerously low and the enemy requirements to activate it is very specific as well, reducing its overall viability. Trying to use it will likely not lead to decent results and is a huge gamble if trying to force Bartre to maintain a maximum of 24 HP at all times.

A vast majority of mages in Heroes can easily dispatch him with the clearest being all red mages, most strong green mages like Nino and Soren, and even some blue mages like Reinhardt and Linde. Some offensive healers can also perform similarly such as Brave Veronica, Priscilla and Elise who, when running Wrathful Staff, can fully exploit his res. Strong red units like Lucina, Mia, Ayra, and Fallen Celica can easily win a fight against Bartre through their sheer force, color advantage, and sometimes good bulk themselves. Bartre himself can barely stand against bulky reds even with his high Atk.

Bartre’s sets maximize on his Atk to launch a single, powerful blow before his opponent gets the chance to attack him. Regardless of his sets, Bartre uses some universal ones. Reposition is expected for unit placement manipulation. His high HP makes him an excellent user of Panic Ploy as well as Infantry Pulse as he is likely higher in HP than most of his enemies or allies respectively. His special can range from Moonbow to ignore 30% of the enemy Def whenever it procs to Glimmer to take full advantage of ally buffs. His high Def also makes Bonfire perfectly viable as well.

Some prefer maxing out Bartre’s offense by giving him a Brave Axe instead. With the ability to attack immediately twice plus 6 more Atk with Death Blow as the usual combo piece, Bartre can launch two immediate 50 Atk on most enemies. Chill Defense penalizes the enemy with the highest Def so he can better run through them.

Axe of Virility is best built to take on Armor units. He already has Fury on hand and the only remaining skill needed is Guard to slow down enemy special cooldown. In combination with a Quick Riposte seal, Bartre patches his slow Spd during the enemy phase.

Earsome Warrior
A warrior from a remote region who takes pride in his strength. Joining his beloved daughter Fir and fully embracing the springtime festivities. Appears in Fire Emblem: The Binding Blade.

Final Chapter: Beyond the Darkness Quote

Bartre- Wild Axefighter
"Bartre continued his quest from country to country. Rumors say that he fell in love with his own mortal enemy."

Bartre and Karla
"Karla and Bartre were reunited in Ostia, During the battle, they became friends. That friendship deepened into love, and they were wed. Later, Karla died of illness. Bartre took their daughter to her uncle and joined Karla."

Bartre - Ferocious Warrior (怒れる闘士 Okoreru tōshi)
"After returning home, Bartre opened a small bar. His jolly personality and uncanny talent for cooking ensured success, but what really kept the customers coming back were the stories he had to tell about his valor in battle."

Bartre is illustrated in the trading card game Fire Emblem Cipher with the following cards: 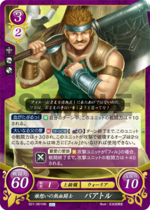 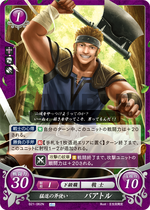