“All right, if you say so. Crap, we can't be sitting here talking. The bandits are catching up to us. Stay behind me, Sister. This is a straight path with nowhere to hide... One wrong move, and we'll be sandwiched!”
—Barts, in a conversation with Enteh

Barts (バーツ Bātsu, fan translated as Bartz) is a playable character from TearRing Saga: Utna Heroes Saga. He is an axefighter from the village of Taurus and the adopted brother of Plum. He is also a close friend of Thomas.

Barts is the son of Daros and his wife, who died when he was very young. He was raised with the belief that Lan was his true mother. After Enteh is kidnapped by Yazam, he travels to his base in order to rescue her. He eventually saves her, but Yazam soon finds out about it and sends his men to hunt them down. The two of them receive aid from Runan and join his army. If he visits Plum's house during the chapter, he takes a Poleax before departing. If he enters his grandfather's house, he receives either a Gold Bag or a Healing Fruit, depending on whether Enteh has also visited or not. After Plum joins Runan's army, Barts makes a failed attempt to stop her out of concern for her safety.

During the liberation of Wellt, Barts can find Thomas inside of a ballista and recruit him to Runan's army. If he is sent with Holmes after the first route split, he can rescue Plum from her owner in Map 14.

Barts's ending changes depending on who rescued Plum from slavery. If Holmes saved her, Barts and Rennie are revealed to be lovers and decide to live together in Salia with permission from Lionheart, who sees him as a son. If Barts rescued Plum instead, they return to Taurus, where he reveals that he has fallen in love with her and decides to leave, presumably to try to make sense of his feelings.

Barts has an informal personality, as befitting for a villager like him. He has a tendency to eat in an impolite manner, which Plum tries to stop because she thinks that it reflects poorly on her. He wishes to become famous on the battlefield and leaves Taurus with the intention of accomplishing that goal. He is also protective towards Plum, which is the reason as to why he initially opposes her decision to join Runan's army.

Barts is a solid unit in the earlier stages on the game. While his Strength, Speed, and HP are decent, his Skill growth is very low, so he is generally outclassed by Samson. The poor hit rates of axes also increase Barts's accuracy issues. However, he can be an asset to the player's team if he is given one or two Skill Plus potions, although they are likely more useful on superior characters. He also has support bonuses with Enteh and Plum that may be useful at times. 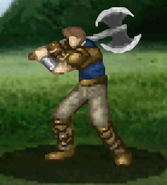 Barts's battle model as a Fighter. 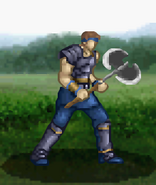