Rend Heaven, Quixotic
[view]
The Basara (婆裟羅) is a combat physical/magic class that is introduced in Fire Emblem Fates. One of the possible promotions of both the Diviner and Spear Fighter classes, Basara are a Hoshidan class appearing as flamboyantly dressed fighters who wield Naginata and Scrolls as their weapons of choice.

Basara are decent fighters as their stats are relatively balanced to handle both physical and magic-oriented attacks. They have high Luck, tying with Falcon Knights for the second highest maximum Luck in the game behind Lodestars. A Basara is similar to the Oni Chieftain, both classes using scrolls and naginata/clubs respectively; although a Basara's stats are more balanced while the Oni Chieftain is more physically oriented.

The Basara class could also be considered as the Hoshidan counterpart of the Dark Knight class as both have similar stat caps; however Basara weapon proficiency caps at A rank for their physical weapon and B rank for magic while the inverse is true for Dark Knights. They are also slightly faster than Dark Knights and have a more reliable offensive skill which can have increased use.

When considering a permanent Basara, one should consider its base classes as they can either come from the Spear Fighter, which has higher strength, or Diviner, who has high magic. Due to this, it can be hard to create a balanced Basara as despite their relatively high growths, their stats reflect their base class. For this reason, generic Basaras may prove to be more ideal to avoid training time.

Basaras are not good pair-up candidates, as they only provide Luck and Resistance boosts. While Luck does affect hit, evasion and critical dodge rates, it is not sufficient enough to replace something like Speed when the player needs to double an enemy unit.

Class skills the Basara learn are Rend Heaven and Quixotic. Rend Heaven takes the strength or magic potential of their enemy and adds half the value to their own stat, increasing the damage they inflict. This allows them to exploit the enemy's strength to break past their defense and is particularly effective against enemies that have ample strength and magic, though it means very little if said stat is low. It also means the attack can be increased greatly when fighting strength or magic-focused units such as Berserkers and Sorcerers, who naturally have high Strength and Magic respectively. Quixotic increases the hit rate of both the user and enemy by 30% and skill activation rates of both by 15%; in both cases it increases the kill potential as units with high Skill can activate offensive skills more frequently and practically have a guarantee of their attack landing. This can prove to be a double-edged sword if the enemy the user is facing has high Skill and equipped with offensive skills, as failing to take them out in a single hit can prove fatal should they manage to retaliate.

Basara (婆裟羅) refers to a group of people from the early Muromachi period who were renowned for ignoring their social status and dressing in fashions that were considered to be extravagant and flamboyant. This fact is reflected aptly in the garb worn by the Basara appearing in Fates, comprising of colours and patterns that are not just brightly-coloured, but also contrast one another rather starkly. 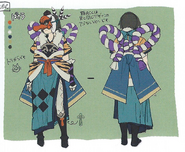 Concept art of a female Basara from Fates