Patrick Seitz
[view]
“Don't you put any stock in this destiny hogwash! Let the dead whine about their fate... As long as I draw breath, I choose to keep fighting! That's what life is all about!”
—Basilio in Chapter 23

Basilio is a playable character from Fire Emblem Awakening.

The West-Khan of the country Ferox, Basilio was the reigning Khan for several years behind his prized champion Lon'qu. However, Lon'qu was bested by Marth and became his new champion for the Ferox tournament. Marth was soundly beaten by Chrom and Basilio lost his ruling status to Flavia. Out of admiration for Chrom's skill, he lends Lon'qu to their cause. Basilio assists Chrom during the Ylisse-Plegia war, fighting alongside his warriors. Though Chrom's army makes it to Plegia Castle, their rescue fails and results in the death of Emmeryn. Basilio prevents Chrom from recklessly trying to kill Gangrel and forces him to retreat for now. Back at Ferox, Chrom's army raises their leader's spirit. Basilio recognizes Chrom's resolve and vows to help him defeat Gangrel once and for all.

Two years after the defeat of Gangrel the continent of Ylisse, mainly Port Ferox, is attacked by Valmese forces. After the battle, Basilio is shocked that his countrymen had difficulty defeating the invaders. With Robin's decision, they decide to invade Valm to remove the threat of the Valmese, who are being led by Walhart the Conqueror. After capturing Steiger Fortress, word arrives that the armies sent to attack the Valm nation to the north and the Chon'sin country to the south were crushed. Robin suggests sending a small group to the north to stall Walhart, which Basilio volunteers to lead. However, Lucina attempts to stop Basilio, as in her timeline, he was killed during this stall attempt. Basilio ignores her warning, telling her that he is not easy to kill. Nevertheless, Flavia joins him to increase the odds of survival.

Upon arriving, the force begins to get mowed by one man, Walhart himself. Walhart and Basilio engage in battle, leaving Basilio gravely wounded. Walhart is impressed by his endurance and comments that only Yen'fay had previously survived a single strike from him. As he moves to finish Basilio, Flavia steps in to parry the assault and allows Basilio to land one great blow on the Conqueror. However, Walhart still stands and deals a final hit to Basilio. Basilio gives Flavia the red jewel Gules to deliver to Chrom as he seemingly dies.

Due to Lucina's warning, Basilio decided to swallow his pride knowing that he was woefully outmatched by Walhart, feigning death and barely survived the encounter. After recovering, he continued to trail the Shepherds from the shadows, as Robin was aware that Validar had placed spies in the Shepherd's camp to monitor their activities. He reappears during Chapter 23 and explains what Robin had done to a shocked Validar, helping Robin and the others clear the Grimleal.

After the war, Basilio did all he could to dethrone Flavia. Even if his selection of champions were unable to beat Flavia's champion, he knew that he could always wait for baby Lucina to grow up and fight for him (with a mask included).

Despite his time as the ruler of Ferox, Basilio often enjoyed leaving the castle for entertainment, as seen in his support conversations with male Robin. He is also a heavy drinker, as shown with some pre-battle dialogue and a conversation between him and Walhart where he states that he is the "Walking Cask of Ferox".

He often acts and speaks in a silly way, with Flavia constantly calling him an oaf due to his attitude. He sees Flavia as both a friend and a rival, although he is afraid of her sometimes due to her threats whenever he accidentally agitates her.

Actually quite quick-witted, he is often viewed as the father-figure of the group due to his old age and personality. He acknowledges the skills of others greatly, as shown when he gave the Shepherds his former champion Lon'qu as a sign of respect for beating his new champion.

Basilio has the strength befitting of his position, as supports between Lon'qu and Gregor shed some further light on Basilio's fighting prowess, with the revelation that Gregor once challenged him for the title of West-Khan, but he was no match for Basilio.

He has the quickest reflexes and biggest reactions in the army.

Like his fellow East-Khan, Basilio starts off as a Promoted unit. His recruitment base stats are a great starting point and makes him a good replacement for lost units or if you need a Warrior unit for the next 3 chapters. Unfortunately Basilio's resistance is quite low and will be problematic against the abundance of mage units in the last few chapters. Luckily he has decent speed and skill stats and growths to compensate for this, but should still remain vigilant to magic users, especially with Wind Mages on higher difficulties. Luckily though, Basilio gains a boost in base stats depending on the difficulty played. It is also worth mentioning that Basilio, if maxed out, will have a better defense and resistance stat by having each be one point higher than that of Vaike's. Overall Basilio is a great late game addition to use but Vaike with decent training and usage and time will most likely be much better than he by the time of his recruitment.

Basilio's base comes from the Fighter class, giving him Zeal and HP +5. He will only have Rally Strength upon his recruitment, but training him 5 more levels will give him Counter which on higher difficulties is a great skill against Hawkeye units. Having Fighter as his base also gives him access to the Hero class. Sol is an excellent attacking skill for Basilio to use over Luna if you prefer regeneration over raw damage. Basilio's high Strength base and growth will give him a decent amount of HP regeneration upon usage, assuming he isn't challenging Knights or Sorcerers. Axebreaker can also be considered if he is to be a unit killer, mostly Wyvern Units and fellow Fighter/Barbarian base units.

Basilio's two base classes are the Barbarian and Knight lines. Barbarian keeps Basilio close to home giving him Gamble and Berserker gives him Axefaire and Wrath. Basilio makes an excellent Berserker given his high Speed and Strength growths but with lower skill and a defense and resistance drop, you may be deterred by the much lower caps. Nevertheless, even if Basilio does not remain in this class, spending a time in them will work to his benefit.

Knight lines work great for Basilio but his low resistance problems continues in this class. Nevertheless, Basilio can find some skills to grab from this class and its promotions. General gives him Pavise which will shave damage from direct weapons, which given his high skill as a Warrior, Basilio becomes much tankier. Great Knight gives him Luna which as mentioned earlier, works great if you prefer raw damage over regeneration. Dual Guard+ can be useful when in a Pair Up with his two main supports: the Robin or Flavia.

Feroxi West-Khan
West-Khan of Regna Ferox, a country led by its preference for battle over politics. A simple warrior who has nothing to hide. Appears in Fire Emblem Awakening.

Basilio - Intrepid Khan
With Grima a done deed, Basilio returned to Ferox and applied himself to dethroning Flavia. If his army of champions failed, he knew he could always wait for little Lucina to grow up (and lend her a mask).

Basilio and Robin
Many wrote of Robin's legendary exploits, but accounts of her origins and character varied. Scholars, poets, and bards agreed on one thing alone—she loved her husband, Basilio, above all else.

Basilio is illustrated in the trading card game Fire Emblem Cipher with the following card: 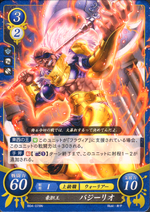 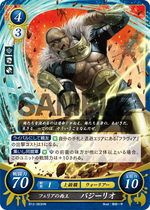 The name Basil has origins from the male Greek name Vassilios. It is derived from "basileus" a Greek word meaning "king".