[view]
“My apologies for the lateness of the hour. Proper social graces are most difficult to observe in wartime.”
—Bastian, reuniting with Queen Elincia in the forest near Sienne.

Bastian, is a playable character from Fire Emblem: Path of Radiance and Fire Emblem: Radiant Dawn. He is the Count of Fayre, and is also a loquacious and influential politician in the Crimea Court. Previously working for Prince Renning, Bastian is also close friends with Geoffrey and Lucia.

After the fall of Crimea, Bastian seeks refuge underground, in hopes of liberating his country from Daein. After joining up with the Crimean Liberation Army, he finds his ideologies conflicting with Ike's authority, most likely stemming from his lack of pedigree. Bastian eventually warms up to Ike after witnessing Elincia vouching for him, alongside Ike's proficiency as a hired guard. After the events of the game, he will hire Volke to perform certain "jobs", some of which are connected to particular events in Radiant Dawn. One of these jobs involve the capture of Izuka in order to find a cure for Renning's crazed stupor, an ailment inflicted upon him by the Feral Drug.

In this game, Bastian serves as Crimea's Deputy Prime Minister and one of Queen Elincia's most trusted advisors. He is, however, noticeably absent from court during the Ludveck crisis, and is instead sent to Daein by Elincia as part of a diplomatic mission to determine the abilities of the newly-crowned King Pelleas. Despite his absence from court, Bastian still plays a significant role in saving Lucia, as he hires Ike and the Greil Mercenaries to halt Ludveck's troops laying siege to Castle Crimea. It is revealed that Bastian was aware of Ludveck's plans for an uprising and chose to leave Crimea in order bait him into putting his plan into action.

Bastian's close contact with the assassin Volke ultimately leads to the eventual capture and execution of the fugitive Izuka.

Bastian is hailed as a master politician by many, as can be observed by the amount of respect he commands in the Crimean Court, alongside possessing a natural skill for cunning. He is shown to be one who takes initiative in carrying out certain tasks which he deems to be of the utmost importance, as can be observed from the investigations he conducts into unearthing the identity of the Black Knight and Bertram.

Bastian's speech is laden with symbolic imagery, and often adopts iambic pentameter in the words he articulates. This alludes to him being a rather romantic person, as this mannerism of his merely serves to hyperbolize the emotions that are associated with practically any situation he appears in.

Through support conversations in Path of Radiance, it is revealed that Bastian is exceedingly wealthy, and is rather proficient in the art of gambling. Due to the immense loyalty he holds towards Crimea, he ensures that his earnings will always be channelled towards the country's benefit.

Bastian joins during the lategame with notably low speed and no time to improve it. Further hampering his viability is his odd choice in wielding knives rather than staves which is useless due to tomes being far better by comparison. He starts with the Corrode skill at base which isn't exactly useful as combat in Fire Emblem tends to be end quickly. Thus, his only notable purpose would be in the backlines casting spells from siege tomes. However, imilar to Lucia and Geoffrey, he has high growths, with everything 30% or higher, and only 2 lower than 40%. His Strength can develop decently if one is devoted to using him, as well as Magic, Skill, and Speed, though the final's unimpressive base is an issue, and his resistance will also grow frequently.

Bastian returns in this game as a pre-promoted magic user. His starting class is that of an Arch Sage, which is essentially a third-tier class. A majority of his stats are either average or low for his level, and his growths are slightly lower than they were in Path of Radiance. As a result of his low Speed stat, Bastian will be unable to perform double attacks on a frequent basis.

However, as the chapter Bastian joins in is practically filled with Laguz-based enemies, his proficiency in all three anima magic types is thus extremely useful. If given the opportunity to level up a few times, he will be able to inflict great amounts of damage upon most enemies with ease. Unfortunately for him, however, Soren at Level 10 Arch Sage after promoting from a Level 20 Wind Sage will most likely outclass Bastian in every stat, especially Magic, Skill, and Resistance.

"Oh, glorious day of sweet victory! Praises upon the day the goddess did see fit to send Sir Ike to save our land."

Bastian is illustrated in the trading card game Fire Emblem Cipher with the following card: 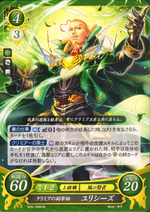 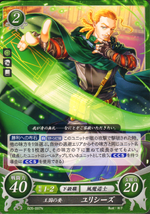 Bastian as a Wind Mage by Yoneko.

Bastian as a Wind Sage by Yoneko.

Bastian as a Wind Mage in Fire Emblem 0 (Cipher).

Bastian as a Wind Sage in Fire Emblem 0 (Cipher). 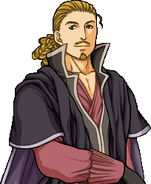 Bastian's portrait in Path of Radiance. 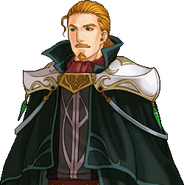 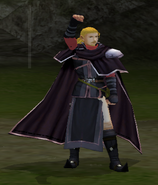 Bastian's battle model as a Sage in Path of Radiance. 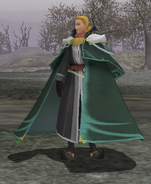