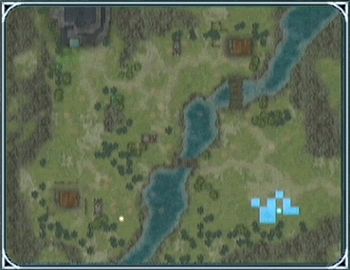 Chapter script
[view]
“The Crimean army defeats General Petrine, one of King Ashnard's feared Four Riders, and finally arrives home. The princess's return is met with the jubilation and tears of the retainers who have managed to survive. "As long as we have Princess Elincia, Crimea will be liberated." These are the words that gave the people hope as they endured the harsh rule of a conquering country. The silent masses, who long for the restoration of their homeland, slowly begin to give voice to their dream. Surely, they think, this chance to see Crimea freed will not be wasted.”
—Opening Narration

Battle Reunion is Chapter 24 of Fire Emblem: Path of Radiance.

This chapter has an Arrive objective so it is possible to beat this chapter easily by using a Flying unit with a Full Guard who has high defense and resistance. The other strategy is to just fight all the enemy units for experience. With this strategy move your units towards the bridges and defeat the enemy units. There are many wyverns and ballistas so be sure not to let units with low defense be in their attack range. Bastian and Lucia will join you shortly but their stats are very low compared to your other units. Among the NPC units here is Geoffrey so try to keep him alive so you can recruit him later. Enemy reinforcements will come from the bottom right so move them out of range. The Black Knight will appear at the bottom right but he is out of your league; do not approach him. The boss Rikard is optional to kill and he is actually much weaker than Petrine, the boss of the previous chapter.