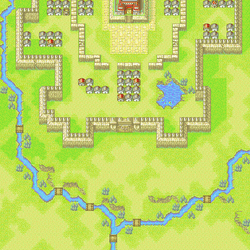 Chapter script
[view]
“After defeating the Djute clan, Roy moved toward Bulgar, the largest city in Sacae. As a center of commerce between Etruria, Bern, and Ilia, Bulgar has had a history of being a free city without a ruler. However, with Bern's invasion, Advisor Roartz now had control of the city under Bern's protection. Roy approached Bulgar to liberate it and to gain some useful information on invading Bern.”
—Opening Narration

Battle in Bulgar (ブルガルの攻防 Burugaru no Kōbō lit. The Offense and Defense of Bulgar) is Chapter 19B of Fire Emblem: The Binding Blade if you take the Sacaen route (which happens if by the end of Chapter 16, the experience points gained by Sue and Sin were more than or equal to that of Shanna and Thea).

The 5 red houses act like villages and give you the items:

Note: this entry is incomplete. Please add to it if you have more information.

There are three ways into the city. Two parts of the wall can be broken near the starting locations of the enemy Wyvern Riders. If you can quickly dispatch the small amount of hostile forces outside the gates, breaking these should prove to be the fastest way inside.

It is important to note that most forces inside the city will start moving towards you as soon as an entrance is made, so a highly evasive or defensive unit should be placed at the front of your first entry force. Both walls have 100 health, but using Eclipse can help destroy them in only two attacks.

The enemy Sages hold a Sleep and a Silence staff, so bringing a Restore staff of your own can be beneficial.

The tool tip for the main gate labels it as a Door, but neither thieves nor the Unlock staff can open it. After around 12 turns, however, the gate will be opened, meaning you can sweep the outside enemy reinforcements and bait out the long range spells before this happens. It is possible to have (part of) your forces wait for the gate to open while taking out the enemy reinforcements.

If you don't plan on rushing the inner area, it may be a good idea to choke the gate with some 1-2 range tank units, preferably some with good Speed and Avoid. Make sure you keep them in range of their support partners. Good examples of this would be a well trained Allen and Lance with Javelins. You should be able to deal with the Wyvern and Nomad reinforcements, if you are prepared for them, since they spawn with relatively basic weaponry, only 2 at a time, and each group comes staggered from each other.

On Turn 13, the boss will order the the soldiers hiding within the villages to appear and attack your army. Due to a translation error and depending on your version, this can sound like they are attacking the villages themselves. Villages aren't known to be pillaged in this chapter, but please correct this if it's wrong.

The boss, Gel, is a Swordmaster with a Light Brand. If you are worried about his critical strikes, only fight from a distance to remove the risk. Fully abuse both combat triangles against him, using Anima magic from a distance and lances from up close to increase your accuracy against him. So long as you can hit, he should fall easily.