Battle in the Lea

Battle in the Lea 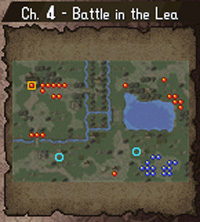 Chapter script
[view]
“After a hard battle, Marth's Altean Army- for it had grown to be called such- set foot at last in the kingdom of Aurelis. However, joining his might to that of the Aurelians would have to wait. As Marth descended into the vast green lea separating his troops from theirs, he heard a terrible sound: the galloping of enemy destriers, far away at first...then closer...Then far too close.”
—Opening Narration

Battle in the Lea is Chapter 4 of the game Fire Emblem: Shadow Dragon.

This chapter was cut from Fire Emblem: Mystery of the Emblem. The first arena in the game can be found here, and can be used to level up all you units to an insane level for chapter 5. The boss possesses a Ridersbane, so keep your cavaliers back. In the village to the north, near where Matthis is deployed, you will receive 5,000 gold if you enter the village with Marth.

This chapter can be particularly annoying, primarily because of the areas of concentration for the enemies. Regardless, even if you do not plan to use Matthis, at least bring Lena to acquire another unit. As for the fighters in the northeast, you will want to send a few units to seal the exit, preferably a well-trained Mercenary and/or Fighter that can survive a couple of attacks at once (another way to do this is to send a couple of units you do not want to use to be killed off). As for the cavalry coming from the northwest, you will want to form a wall or barrier around your weaker units by using tougher units like Barst or Draug to stand off the heavy cavalry (Make sure you do not kill Matthis, he is recruitable by talking to him with Lena). Also, do not forget to kill the thief coming from the central north bridge. After holding off the cavalry, send Marth to the southwest village to recruit Merric, a young mage with a lot of potential.

Once you get closer to the seize point, a small group of horsemen will come at you. Position a Knight or a Mercenary at the bridge to withstand their speedy attacks. Since horsemen are promoted versions of Hunters, let your stronger units weaken them up, and let units you want to use throughout the whole game finish them off, so they can acquire some early EXP (especially if you are on Harder modes). Northeast of the bridge is another village. Visit it with Marth to obtain 5,000 gold. Northwest of that village is an arena. If you want to level up your units faster, send them there (be very careful though, as the arena can be especially brutal to low-level units).

As for fighting Bentheon, the boss, be sure you kill the nearby Cleric , preferably with a weaker unit you plan to use throughout the whole game. Next, do not use cavalry (he has a Ridersbane), but instead, use axes and/or ranged weaponry to attack Bentheon. You can also use Merric so he can gain some good exp. Bentheon is helpless at range, and Merric starts at LV 1, so he will need the extra exp. After a few blows, he should go down. After seizing the castle, Marth will receive a Silver Sword.