View source
“Grannvale's disturbance, stemming from the campaign in Isaach, led one young man into a disastrous fate. ”
—Closing of Chapter 5 in Genealogy of the Holy War

The Battle of Belhalla (バーハラの戦い, Battle of Barhara in the Japanese version), also known as the Belhalla Massacre, is an event at the end of Chapter 5 of Fire Emblem: Genealogy of the Holy War, occurring in Gran Calendar Year 761. It is the final event in Sigurd's tale, and it is planned by Arvis in order to remove all obstacles in his plan to unify the continent.

The forlorn prelude to the Battle of Belhalla begins after Reptor of Friege is defeated, and Sigurd confronts Arvis’s confidant General Aida in Velthomer. Aida tells Sigurd that Arvis knew of his innocence all along, and that the Royal Guard led by Arvis has prepared a celebration for Sigurd’s army near Belhalla.

Sigurd suspects nothing, and after he talks with Arvis for a little while about King Azmur, Arvis decides to cut him off and tells him that he is still considered a traitor guilty of killing Prince Kurth (even though he and his father Byron, who was also blamed, were innocent). Arvis then brings Deirdre out long enough only for Sigurd to be in shock and for Deirdre to suspect that she knows Sigurd (she had her memories of him erased during Chapter 3). Arvis then incinerates Sigurd with the Valflame. Sigurd’s army is simultaneously bombarded by a storm of Meteor spells cast by the Roten Ritter, and they are surrounded by the Royal Guard, but some of his army manage to escape.

Regarding those who fought with Sigurd during the First Generation, here is what is known aside from Sigurd's death:

Sigurd's army was branded as traitors, and it is hinted in Fire Emblem: Thracia 776 that those captured were turned into stone by Veld, as it is stated by August that the stone statues in the Yied Shrine included "the captives of the war in Belhalla from a decade ago".

During Chapter 10, Seliph defeats Arvis to avenge his father, and he battles and kills Manfroy alongside others in the Final Chapter. 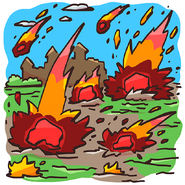