The Lance version of the Beast Killer can be perceived to be the Awakening and Fates rendition of the Horseslayer. 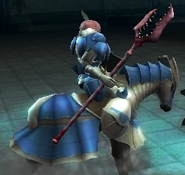