Imari Williams
[view]
“There's a difference, though. I want to talk. I'm just no good at it.”
—Benny in a support conversation with Beruka

Benny is a playable character in Fire Emblem Fates and an ally on the Conquest and Revelation routes.

Born as a commoner in Nohr in a farming village, Benny became a border guard for the kingdom and works often with Charlotte. If he achieves an S-Support, he will have a son named Ignatius.

Benny appears briefly in Chapter 14 as Corrin and the Hoshidan army launches an assault at the Border Walls where he and Charlotte are defending. The border guards are defeated and Benny's fate is unknown.

On Chapter 13, Corrin's army arrives at Cheve to stop the rebellion. The sounds of battle eventually waken Benny and Charlotte; Charlotte is angry at the Chevois for disturbing her sleep while Benny is indifferent to the raging battle. After a short misunderstanding by Corrin, Benny attempts to tell them that Charlotte wanted to "kick their asses", but is quickly hushed up by her. Benny follows along with Charlotte and joins the army.

After hearing Corrin stopping Xander and Ryoma from clashing at the Destroyed Town, King Garon sends Benny and Charlotte alongside Silas to Port Dia to stop Corrin. During their battle, Benny meets Elise who politely says hello to him. He is surprised when she calls him a softie as he is used to others being intimidated by his appearance. After asking if Benny would like to join Corrin's army, Benny accepts, hoping to meet other kind individuals in the army like Elise.

In Paralogue 17, Benny is informed by some villagers that a knight is defending the village alone. Realizing it's his son, Ignatius, Benny and the army head straight to the Village to save his son and protect the village. When reuniting with his Ignatius, he mistakes him for an enemy and threatens to kill him, before Benny tells him it's his father. Ignatius is surprised to see him, and Benny claims he came running as soon as he heard he was in trouble and tells him to leave while he fights, but Ignatius won't and wants to fight alongside his father to defend the village, Benny agrees to this.

After a long battle, the village is safe from the invisible forces. Benny approaches his son, proud of his newfound strength. Ignatius plays down his father's compliments, saying that if not for his original rescue, he would have most likely been killed. Knowing that he still is not as strong as his father, he demands to join the army to become stronger alongside his father. Benny obliges, but tells Ignatius that he is not as brave as he thinks as he has only been in war for a short time compared to most of the other war hardened members of the army. Nevertheless, Ignatius tells his father that he wants to become a hero just like him and Benny responds that Ignatius is fine just the way he is.

Despite his fearsome looks, Benny is a gentle giant. He cares for the well-being of his comrades and has a soft spot for animals, usually hanging out alone in the woods. Benny appears to be reserved, as he usually speaks short sentences. However, it is revealed that he has difficulty conversing with others and usually creates awkward moments, especially with his son. It is also shown that he is slightly afraid of ghosts. Benny expresses pride in his son and even gets emotional when Ignatius tells him that he would not have any other person for a father.

Due to Benny's intimidating appearance, it often creates ill (and usually exaggerated) rumors about him, which often causes curious people to ask him if he had ever performed such feats. Although he usually ignores them, he sometimes feels hurt from them.

Benny also creates charms to help him in battle, as shown with Ignatius in his paralogue and his supports with Corrin, Hayato, and Oboro.

Benny serves as the traditional physical wall Knight compared to the offensive tank set up of fellow Knight, Effie. He has a solid HP and Defensive growth and a decent resistance growth the help him absorb would-be attempts at attacking his allies, making him great for choke points and one-tile alleyways. His only main flaw is an atrocious Speed growth, which makes it almost impossible for him to double. However, given his role as a defensive wall, it does not hinder him too much. Benny's personal skill is Fierce Mien, lowering the Avoid of enemies within 2 spaces by -10. Though it works for support purposes, this effectively gives Benny a free +10 hit, letting him wield many of the lower-accuracy Lances and a lot of Axes easier than other units. He starts off as a Knight and comes with its two skills, Defense +2 and Natural Cover. From this class, Benny can promote either into a General or a Great Knight. It is highly recommended to promote him into a General first, as Benny's poor Speed growths will result in him getting doubled by almost every other unit in-game.

From the General class, Benny can learn Wary Fighter and Pavise. Wary Fighter is an absolute must-have, since he will almost never double, but his enemies can easily double him without this skill. His already strong Defense makes Pavise a little redundant, but the more damage that can be shaved off of him, the better.

From the Great Knight class, Benny will learn his only offensive skill from his base classes, Luna. He can also learn Armored Blow to have him tank incoming physical attacks even better. Combined with Pavise and high Defense growths, Benny should be taking very little physical damage overall.

Benny's secondary class is the Fighter class set. From the Fighter class, Benny can learn HP +5 to be able to endure more attacks if needed. He can also learn Gamble to increase his critical hit rates, although it will drop his Hit by 10. However, due to his personal skill, this accuracy loss is negated and allows Benny to have normal accuracy with the critical hit bonus.

From the Fighter class, Benny can promote to either Berserker or Hero classes. From the Berserker class, Benny will enjoy a +15% critical hit rate bonus, but suffers from having the growths of a tank in a glass cannon class. The most important skill from this class is Axefaire, as unless he gets an A+ Support with Hayato in Revelation or uses a Partner Seal, all of Benny's promoted classes can wield axes in combat. From the Hero class, Benny can learn Sol to recover lost HP and Axebreaker to better deal with enemy axe users.

Benny has only one additional class set, and this is derived from Hayato, who is only available on the Revelation route. Arthur and Keaton provide no new classes to him, but he can bestow them his Knight class; as such, it's best to initiate A+ support from their side only.

Benny returned to his hometown village and was assigned to train new soldiers in combat. He never reported for duty. Instead, he lived out his days in the forest, frolicking with his animal friends.

Benny is illustrated in the trading card game Fire Emblem Cipher with the following cards: 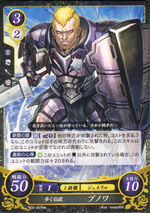 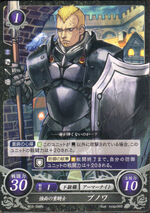 Benny can be a diminutive of names such as Benoît, Benjamin, Benedict, and Bernard.

Benoît is a Catholic French male given name. The name is the Old French word for "blessed" and is the equivalent of Benedict.

The name was changed in the West to avoid a reference to the wrestler Chris Benoit, who was notorious for a murder-suicide.