The Beorc (ベオク) are a race in the Tellius Series of Fire Emblem. Comparable to humans in the other games, beorc have no special abilities regarding transformation, as opposed to their Laguz counterparts. Where the Laguz use claws, fangs, beaks, talons, and breath as weapons, beorc use tomes, swords, axes, lances, bows, and other items to fight, as with the characters of every other Fire Emblem game. In Tellius society, beorc co-exist with the laguz, and like the laguz they are descended from the ancient Zunanma race. Beorc are known as the "Children of Wisdom."

Large racial gaps exist between beorc and laguz. The Begnion Empire, a beorc nation, enslaved the laguz before Apostle Misaha (grandmother of the current empress, Sanaki) passed the Laguz Emancipation Act, freeing laguz from slavery in Begnion; however, laguz are still kept as hidden slaves by some nobles. Led by Senator Caradock, Begnion's suzerain state Crimea broke with its mother country in order to establish a nation which could foster peace and friendship with the laguz who had settled in Gallia, Phoenicis, Kilvas, and Goldoa. However, racial division is still present, even in Crimea: for example, many beorc use the derogatory term "sub-human" in reference to laguz. The beorc are sometimes called "Humans" by the laguz to counter the "sub-human" insult. Contrary to the forming principle of Crimea, the beorc country of Daein was formed when the Begnion senator Hengist felt that Begnion was becoming too laguz-friendly. Even in the present, Daein is still very anti-laguz, and as stated by Jill, teaches its children from a young age to hate the "Sub-humans."

The Branded are children born of one beorc parent and one laguz parent, so named because of the special brand they bear. While they lack the laguz's ability to transform, many are endowed with special magical powers or physical strength. Branded children appear to be normal beorc; therefore, some Branded are unaware of their own heritage. Beorc tend to actively persecute known Branded children, while laguz simply ignore them.

The Beorc can use special scrolls, called Arms Scrolls, which allow any unit to upgrade the level of the currently equipped weapon by one level.

Non-magic-wielding beorc characters can acquire special magic cards, which allow the unit to cast magical attacks. Like attacks from a tome, these cards are useful when attacking an enemy with high defense, but low resistance. 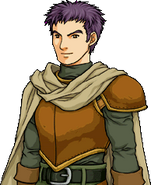