Free Knight
[view]
“I've known your true feelings all along... Take good care of yourself. It was mighty nice while it lasted.”
—Beowolf, in his final lovers' conversation with Lachesis

Beowolf is a playable character from Fire Emblem: Genealogy of the Holy War.

Beowolf is a mercenary from Conote alongside Voltz, his friend, and partner. During his job for Macbeth, Beowolf expresses a certain distaste towards his employer, Macbeth, while Voltz says as a mercenary Beowolf is free to choose work for whoever he chooses, even if it means they'll eventually be at odds. He can be recruited if the player allows any unit to pay him 10,000 gold. If this happens, Beowolf, and Voltz battle for their different employers until the latter is slain, just as Voltz predicted.

Beowolf is also apparently an old friend of Lord Eldigan, according to a conversation he shares with Eldigan's sister Lachesis. He will eventually perish in the Battle of Belhalla, alongside several of his fellow comrades.

According to Fergus's ending in Fire Emblem: Thracia 776, Beowolf is widely rumored to be his father, apparently having conceived him with a princess of Conote.

Beowolf started the Beowolf Archetype, where the unit in question may only be recruited in exchange for a fairly huge sum of gold.

Beowulf is stated to be a down to earth and somewhat unrefined individual. [1] The fact that he can be recruited just after receiving a great amount of money may indicate his detached but practical view about war.

Barring his availability, Beowolf has just about everything a unit in the first generation needs to be good. He is mounted in a game that heavily favors units with high Movement due to the large maps. He comes with Pursuit and Charge, giving him stable and solid offense. He can wield Swords, the game's best weapon type, and though he cannot wield other weapons, he also has little need to do so. Lastly, his stats are fairly good all-around, with his only weak point being the low Resistance shared by most characters. While his overall playstyle is very basic and nothing much about him is truly standout, he is a very reliable unit with no major issues.

He will initially have a bit of trouble killing enemies in a single combat, but after he Promotes to Ranger, he will likely surpass characters like Alec, Finn and Naoise in potency as his promotion will net him A-rank Swords, Adept, and a huge boost to his stats. He will likely finish as one of the better overall mounted units, as he gains more from his promotion than many others do in the first generation.

Beowolf is a pretty safe choice of father, as he passes down average but evenly split growths with a trend toward offense. His skills are common, but Pursuit is important to pass down. He has no Holy Blood. He will generally have an easy time passing on some good Swords since many children can wield them.

Beowolf is best paired with Lachesis. Brigid and Edain are decent pairings with some flaws. While Ayra will work out just fine, she has so many superior choices of father than Beowolf that it cannot realistically be considered a good pairing. The rest of the pairings are not worth it due to Pursuit redundancy, unremarkable pairings, or Magic oriented children being harmed by Beowolf's growths.

In Chapter 2, any one of the player's units may recruit Beowolf, as long as the conversation initiator possesses 10,000 gold.

In Chapter 2, after Anphony Castle is captured, Beowolf may speak to Lachesis, resulting in her gaining two points of Strength, two points of Skill, one point of Defense, and 100 love points with him.

In Chapter 5, after Phinora Castle is captured, if Lachesis is in love with Beowolf, she may speak to him, but nothing will result of it.

Beowolf is illustrated in the trading card game with the following cards: 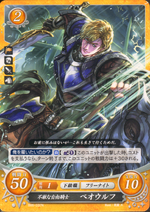 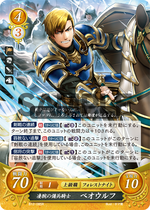 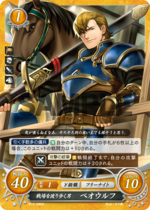 Beowolf's name is depicted in the epic poem Anglo-Saxon times, the main character being from Geatland, the southern part of modern day Sweden. The hero's name is Beowulf, son of Ecgtheow, and he is a Geatish hero who comes to aid king Hroðgar of the Danes. Hroðgar is plagued by a demon named Grendel, who is a descendent of the Biblical Cain.

Beowulf swears loyalty to Hroðgar and severs Grendel's arm with his bare hands. Grendel retreats to the marshes, where he dies. Grendel's arm is nailed to the ceiling of Heorot, Hroðgar's meadhall. Beowulf is richly rewarded for his deeds, and is awarded with foster kinship with king Hroðgar (lineage was important to the Anglo-Saxons). Grendel's mother decides to avenge Grendel, but rather than killing Beowulf, she kills Hroðgar's right hand man Æschere. Beowulf pursues her into her underwater cave, where he kills and beheads the ketta with a sword from the giants (the Romans), that only he could have lifted.

The head of the ketta is taken out of the cave, along with the hilt of the giant-sword. The head takes four of his thanes (warriors) to carry. Beowulf is once again rewarded with gold and treasure, including a sword called Naegling. Beowulf parts with Hroðgar and they never meet again.

Beowulf succeed's his own king's throne and rules over the land for fifty years. One day, a fire dragon, awakens in retaliation against a thief stealing part of its treasure and ravages the land. Beowulf goes out to fight, knowing he will probably die. Wiglaf, one of his warriors, fights next to Beowulf. Together, they slay the dragon. Wiglaf is named Beowulf's successor after he dies by the dragon. Beowulf is cremated on a funeral pyre, and buried along with the treasure he had accumulated and the treasure the dragon had hoarded.