Map 7: Liberation of the Capital

General
[view]
“Fear not, milord. The rebels are but little birds that have flown into our trap. I shall break their necks in one swift stroke!”
—Berom, upon receiving orders from Codha

Berom is one of Codha's trusted generals and the boss of Map 7. After Domes's death, he is tasked with defending Castle Wellt's gate from Runan's forces, but ultimately dies fighting them on the battlefield.

The official site says despite his appearance, Berom is strong and capable with a sword.

“You shall not pass here! As long as I live, you shall never reach the palace!”
—Berom's battle quote

“Damn... Perhaps... Siding with Chancellor Codha... was a mistake after all...”
—Berom's death quote 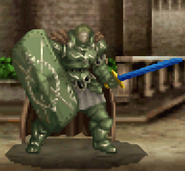