Berserk is a Staff that debuted in Fire Emblem: Genealogy of the Holy War.

Berserk is a reaccuring Staff in the Fire Emblem Series. When cast, this staff will cause a selected enemy unit to be inficted with the Berserk condition, where the affected unit will attempt to attack (or in the case of thieves in some games, steal items), other units regardless of affiliation.

The Berserk status inflicted can be healed with a Restore Staff.

The Berserk Staff, as it appears in the second series of the TCG. 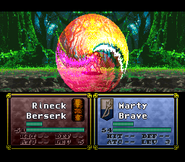