The Berserker's Axe (狂戦士の斧 Kyōsenshi no ono) is an Axe that debuts in Fire Emblem Fates. A bonus item in the game, the Berserker's Axe is very similar to the Devil Axe in its menacing appearance and overall function. The weapon deals high amounts of damage and has particularly high accuracy for an axe-type weapon, but it comes with the costly 30% HP reduction after each round of combat the user is involved in, distinguishing it from the Luck-based chance of damaging the user instead like the Devil Axe. The HP reduction cannot kill the wielder, instead leaving them at 1 HP. This makes the Berserker's Axe a risky but powerful complement to skills such as Vengeance, Vantage, and Awakening.

Similar weapons include the Sacrificial Knife and the (true) Ganglari: both weapons have exceptionally high might and a decent chance to hit, but come with an HP reduction post-battle. 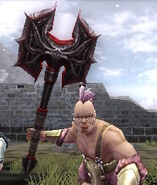