Berserkers (バーサーカー Bāsākā) are powerful axe-wielding units that usually promote from Brigands, Pirates, and Barbarians. They have high HP and Strength, but low Skill and resistance. Also, they possess a special characteristic: they have 15% extra Critical Hit ratings, just like Swordmasters and Snipers. Although the class has traditionally been male-only, in Fates the class became unisex with female berserkers.

The name Berserker was first used for the unrelated class in the original Fire Emblem: Mystery of the Emblem. This Berserker was a variation of the Hero class.

The traditional Berserkers modern incarnation appeared in Fire Emblem: Thracia 776 in which they were enemy-only axe users with Wrath as a class skill and the ability to walk across mountain and water tiles.

In Fire Emblem: Path of Radiance, the class that promotes into Berserkers, Bandits, are enemy-only, but they can promote the very same way as any other unit (i.e. with a Master Seal or upon reaching Lv. 21).

Though Bandits are present in Fire Emblem: Radiant Dawn, Berserkers are strangely absent, meaning the playable Berserker from Path Of Radiance, Largo, is non-playable.

In the spinoff Genei Ibun Roku ♯FE, Berserkers are retooled as Armored axe users, being an alternate class change for the Armor Knight Mirage Draug.

Berserkers fight in much the same way as Pirates and Brigands do. Their increased critical hit rate, and ability to cross terrain (such as Peaks and Water) makes them valuable attacking units.

Berserkers are purely offensive units: their Defense and Resistance are very shallow, making them unsuited to take lots of abuse, despite their humongous HP growths. Since they wield axes, Beserkers can take maximum advantage of their Strength without worrying about range, though this has the drawback of being rather inaccurate. In Awakening, the two skills Berserkers can learn are Wrath and Axefaire. Wrath boosts the user's Critical Rate by 20 when at least half of their HP has been depleted. This skill can be combined with Vantage to swiftly defeat the enemy before the user can be touched. In addition, stack the former two skills on Gamble and Zeal (from the Fighter class) as well as equip the Berserker with a Killer Axe and watch the guaranteed massacre. Axefaire boosts the user's Strength by 5 when he is equipped with an axe. It is very useful for bolstering the Berserker's already gigantic Attack, so to your discretion.

In all of their appearances, Berserkers are rare units, the player's army often recruiting only one, Binding Blade containing the largest amount of recruitable Berserkers at three. Sometimes the only playable Berserker will be Pre-Promoted.

In WiFi battles, Berserkers are considered to be good units because they possess enough speed to not be doubled, yet have far higher strength than normal high-speed units like Swordmasters and Snipers. This ability means they can kill units like Generals and Dracoknights. However, they lack the ability to double some other units, such as Paladins and Sages. Their high strength also allows them to use Poleaxes as a good means of attack. There exists combos based around using cards like Judgement, warping and Berserkers. These combos allow a player to effectively win a battle on the first turn. Berserkers' main weakness is their low movement. This is slightly mitigated by their ability to cross sea terrain, but few WiFi maps have such terrain. 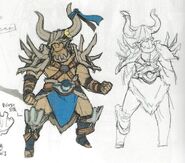 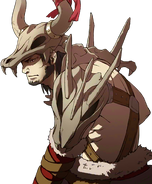 Generic portrait of the Berserker class from Awakening.

Animation of a Berserker performing a normal attack in the GBA titles.

Animation of Gonzales, a Berserker from Binding Blade, performing a critical attack.

Map sprite of the Berserker class from Fire Emblem: Rekka no Ken.

Map sprite of the Berserker class from Shin Monshō no Nazo ~Hikari to Kage no Eiyū~.