Beruka is a soldier orphaned in the slums of Nohr. She was adopted by a notable Nohrian assassin and was taught the art of assassination, though she reveals in her support with Oboro that she never received any love from him. She eventually came into the services of Princess Camilla during an assassination attempt on her. Camilla managed to convince Beruka to not complete the task by hiring her on the spot. She is a masterful professional killer with an aura that keeps people away from her. Due to her former profession, she often relates many things with assassination or a contract.

She is the most immune to poison.

Her supports with Jakob show that due to being raised in the slums, the only thing she learned throughout her life was killing people. It is also shown that she prefers working alone and doesn't like working with others, as another support with her reveals that as a result of being with the army, she is afraid that she cannot do her task properly.

During her supports with Camilla, she reveals that she would assassinate her if someone either offered her more money or was more trustworthy than Camilla. She then tells Camilla not to worry, because she's never met anyone more trustworthy than Camilla. In her skinship lines she reveals that her armor once belonged to Camilla.

Beruka is a derivative of "Beronica", a name of Old Greek origin that means "bearer of victory".

Beruka as she appears in Fire Emblem 0 (Cipher).

Beruka as she appears in Fire Emblem 0 (Cipher) as a Wyvern Lord. 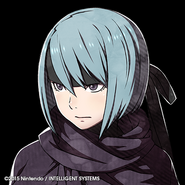