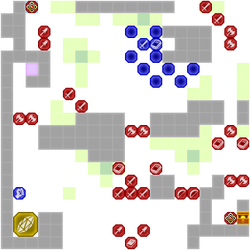 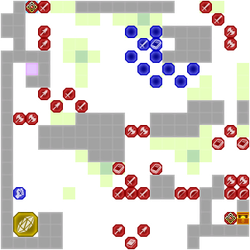 Byleth, Balthus and 10 others

Betrayal/Script
[view]
“We have abducted Cardinal Aelfric. We can guarantee his safety, for now. If you want to help him, meet us tomorrow evening in the ruins of the old chapel. Bring the chalice. Know that if you alert the knights, the cardinal's life will be forfeit.”
—Metodey's ransom note

Betrayal is the fifth chapter of the Cindered Shadows side story for Fire Emblem: Three Houses.

The party reports to Rhea, explains all that has transpired, and convinces her to allow them to head to the chapel ruins with the Chalice of Beginnings to rescue Aelfric. When a knight protests, she expresses her confidence that nobody can replicate the Rite of Rising. The party returns to Abyss and asks Yuri how he ended up there in the first place. He admits that during his time as a member of the Officer's Academy, he was ordered to kill members of his own gang; when he protested, the ensuing argument escalated into him murdering the members of the church, and only Aelfric's intervention prevented him from being executed. Linhardt remembers the names of the Four Apostles who performed the original Rite of Rising, and the Ashen Wolves admit to possessing the Crests of the Apostles: Aubin for Yuri, Chevalier for Balthus, Timotheos for Hapi, and Noa for Constance. The group prepares to depart for the chapel.

Shortly before moving out, Yuri asks Byleth to meet him at the Holy Mausoleum at midnight tomorrow night. Meanwhile, Rhea is explaining that the Chalice of Beginnings uses the Four Apostles' blood to trigger the Rite of Rising to a priest when she suddenly has an epiphany and orders him to investigate the origins of the Ashen Wolves and summon Alois. Byleth and their companions head to the chapel ruins and confront the marauders and their leader, Metodey. Hapi uses her sigh to summon giant monsters to distract the marauders while they rescue Aelfric, and the party slays the marauders and forces Metodey to retreat. However, Aelfric and Yuri betray the group, steal the Chalice, and abduct the rest of the Ashen Wolves. The unharmed Byleth]] regroups with the other students, and Rhea arrives. She explains that Aelfric's goal is almost certainly to use the blood of the Ashen Wolves to trigger the Rite of Rising; the Chalice can restore life to a body, but cannot bring back a deceased soul. Alois appears and reports that thieves have breached Garreg Mach Monastery and are pillaging everything in sight, forcing Rhea to deploy the Knights of Seiros to deter them. Byleth informs their students about Yuri's request to meet them at the Holy Mausoleum, and the group decides to go.

Note: All reinforcements are halted if the Thief Leader is defeated.

The bandit forces will keep spawning reinforcements every turn, untill you manage to defeat the Thief Leader. A good strategy is to attack the Thief Leader with Constance's Bolting. Even if it missess, the Bandit Leader will come charging right towards your units. Also use some of your tankier units (Edelgard/Hilda) to lure the units to your immediate West and South towards your position, while Dimitri can be used to block of the Nort-eastern chokepoint. On turn 2, using various gambits, you should be able to kill the Thief Leader (spawning the Monster reinforcements), while either killing/incapacitating all other units in your immediate vicinity.
After that, you can continue South towards where Balthus spawns, not that he is in any danger of getting killed, but it is best to let him regroup with the rest of your units. Continue onwards towards Metodey, who does not have Distant Counter, so who can easily be taken out by your ranged units. Make sure Metodey isnt the last unit you kill on this map, because that will make it almost impossible to acquire the Silver Sword + in the chest behind him. Once Metodey has been defeated, clean up the rest of the map for an easy victory.