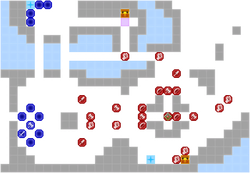 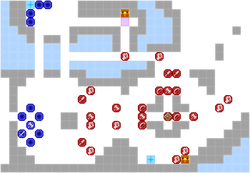 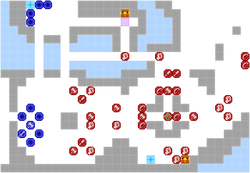 血路の先へ, Beyond the Path of Blood

Chapter script
[view]
“It is Imperial Year 1185. Half a decade has passed since Emperor Edelgard ascended the Imperial throne, yet the continent of Fódlan still remains lost in a tempest of turmoil and bloodshed. In the Holy Kingdom of Faerghus, King Dimitri has welcomed Archbishop Rhea and her knights, who were driven out of Garreg Mach, to the Kingdom capital. As they work to build a unified front, the war with the Empire rages on to the west. Meanwhile, Claude, leader of the Alliance, staves off Imperial intervention by strategically stirring up conflicts between Leicester lords in an effort to feign neutrality. As events unfold, Edelgard and her Black Eagle Strike Force begin to take action in an attempt to break the war's current state of deadlock.”
—Opening narration

A mysterious voice urges Byleth to wake from slumber. When Byleth awakes, they find themselves in a village near the base of Garreg Mach Monastery. A villager answers Byleth's questions and tells them that they it is the Etheral Moon of the year 1185 and the day before the Millennium Festival. Byleth sets out for the monastery despite the villager's warnings about the Imperial army being there. Inside the monastery, Byleth runs into Edelgard. Edelgard is shocked and relieved to see her former mentor is still alive and hugs them, while also telling them that her resolve to bring down Rhea has not faltered. After bringing Byleth up to speed about her stalemate in the war against the Church of Seiros, the Holy Kingdom of Faerghus and the Leicester Alliance, she reintroduces Byleth to the former Black Eagle students that are now part of the Strike Force, all of them happy to see their former mentor again. Edelgard and Hubert then explain their next objective: to eliminate the Leicester Alliance (so that there is one less enemy to fight) by conquering House Riegan's capital, Derdriu (aka the Aquatic Capital). In order to get to cross the Airimid River, the Empire must take the Great Bridge of Myridin to gain an efficient entry point into the Alliance.

The North-East reinforcements will leave once you kill Leonie/the Paladin.