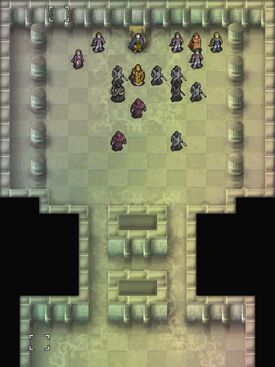 Beyond The Legend is Map 5 of TearRing Saga: Utna Heroes Saga.

A quite short and simple map. There will not be much to do since the NPC mages should have taken care of most of the enemy soldiers by the time you reach there. You should only focus on having your units reach Maruju quickly to help and recruit him with Enteh. However, Maruju will immediately start running towards Enteh from the beginning and recruit himself on NPC phase 3 provided Enteh moved all forward on the second player phase, so you don't need to worry about talking to him yourself. Zeek should also be easy to recruit by Runan as he won't attack and automatically reach Runan to talk.

The only thing that you should be cautious is the enemy Dark Mages and Dagon. The Dark Mages hit hard and absorb HP with their Januras, take them out by reducing their HP with high speed or high evasion units first then finish them with strong units. As for Dagon, his Black Hole tome can deal great damage at high accuracy to a wide range of targets but can only be used once per 2 turns. Take this chance, after he has landed the first attack, surround him so that he won't be able to move or attack, then you can finish him off at ease since his defense is rather high.