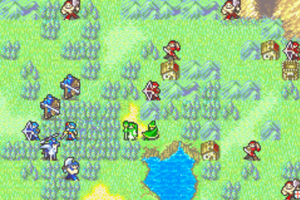 Chapter script
[view]
“The next morning comes too quickly. Lyn has fought back the bandit's attack. Now, she rushes for the border of Bern. If she can reach it, Lycia itself is not far off. For a moment, Lyn stops to imagine the face of the grandfather she's never seen.”
—Opening Narration

Beyond the Borders is Chapter 5 of Fire Emblem: The Blazing Blade.

Before reaching Lycia, Lyn's group is attacked once more by bandits, this time led by Bug. At the same time, the Ostian cleric Serra and her escort, Erk, stumble upon the battle since they got lost amidst the trees. Lyn talks with them, and they agree to team up to defeat the bandits quicker.

Afterward, Serra and Erk say goodbye and leave, but Sain stops them and recommends that they remain with them, as their magic and healing powers are sorely needed. Serra agrees, much to Erk's dismay. However, if Serra is felled during this chapter, she will instead send Erk to join Lyn, stating that she's too hurt to continue travelling, and lies down where the battle took place and waits for her wounds to heal.