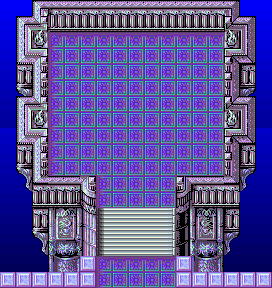 Chapter script
[view]
“After Roy's defeat of Zephiel, Brunnya, and finally the dragon Jahn, Roy's army goes to fight Idunn in the Dragon Temple to end Zephiel's crazed attempt to have her make a "perfect world" of War Dragons.”
—Opening Narration

Beyond the Darkness is Chapter 25 and the Final Chapter of Fire Emblem: The Binding Blade. This chapter takes place on top of the Dragon Sanctuary.

See Main Article: Beyond the Darkness/Script.

The chapter ends when Idunn is defeated.

If Roy strikes the final blow using the Binding Blade while Fae is alive, a different, happier ending will be shown in which Idunn breaks free of the spell she was under and returns to Arcadia with Fae and Sophia.

This chapter is unlocked by defeating the King of Bern and having all of the divine weapons intact.

Note: When you begin this chapter, you will not be able to change your party and restock. So do not be careless in your items and party members in Chapter 24.

Note: Some unmarked tiles on this map will give a +10 point boost to a unit's resistance stat.