“Do you think so? I'll have you know that Lady Sharon here could whoop me ten times over without breaking a sweat. So why don't you just shut your mouth, you old crone?”
—Billford, in a conversation with a villager

Billford (ビルフォード Birufōdo) is a playable character from TearRing Saga: Utna Heroes Saga. He is a former knight of Barge and a subordinate of Sharon. He is also known as the Wild Bull of Barge. Alongside Sharon, he works as a mercenary in Sene in order to obtain resources so that they can eventually reclaim Barge.

Billford is introduced alongside Sharon when they enter a house belonging to an elderly woman who works with slave traders. When the elder talks down to his superior for being a woman, Billford defends Sharon by praising her strength and stating that she is more powerful than him. Afterwards, he and Sharon enter a battle against Runan's army in defense of Sene. During the chapter, he can be recruited to Runan's army by Sharon after Raffin speaks to her.

In the ending, Billford returns to Barge with Sharon. The two of them are also accompanied by Raffin if he accepted the Dragon Flute from Sharon.

He appears as an enemy unit in Map 10. To recruit him, either have Sharon speak to him or keep him alive by the end of the map.

Billford is the more balanced of the two Armor Knights, with weaker Strength, but almost universally better growths everywhere else. Now, Norton promotes into the Iron Knight class, giving him the edge in move to Billford's General, which is more powerful, giving Billford a statistical edge. Billford has a 5% move growth, which can help his poor movement, one point is enough to do so, though chances are slim.

“My name is Billford, the Wild Ox of Barge! Get a good look, 'cause it's the last thing you're ever going to see!”
—Billford's battle quote as an enemy 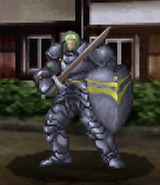