The Binding Shield (封印の盾, lit. Binding Shield), later renamed as the Fire Emblem (ファイアーエムブレム), also called the Crest of Flames (炎の紋章) is the legendary shield of Archanea and the counterpart of the Falchion.

The Binding Shield is called the Pedestal of Flames (炎の台座) in the Japanese version of Fire Emblem Awakening. When Tiki is first met, she asked if the army had with them the 'Crest of Flames', the name which Chrom didn't recognize. Only after Tiki explained that it was the treasure passed down in royal family did Chrom understand.

Another world version of the Binding Shield appears in Fire Emblem Warriors and is called the Shield of Flames (炎の盾).

Originally forged by Naga from one of her fangs, she used it to seal away the Earth Dragons, who had turned feral and were threatening to destroy humanity. After her death, the shield was stolen by a thief named Adrah, who removed and sold the gemstones placed in it, thus unknowingly weakening the seal over the Earth Dragons. The thief would later go on to found the kingdom of Archanea and kept the shield, now renamed the Fire Emblem, as a royal treasure. During the battle against Medeus and the Dolhr Empire, the Fire Emblem was wielded by Duke Cartas, leader of the rebellion against Medeus, although it was ultimately the peasant born Anri, wielding the Falchion, who would slay Medeus.

Sometime after the Binding Shield became the Fire Emblem, a curse was put on it, dooming its wielders, who for most of its history was the Archanea royal family, to misery. There are two different origins given for the curse: Mystery of the Emblem implies the curse began when Adrah stole the shield and removed the orbs, while Shadow Dragon implies that the curse originated with Artemis, who cursed it in order to guarantee Cartas victory against Medeus. Though she loved the hero Anri, she was never able to marry him due to his commoner status. This became known as Artemis' Curse. It was said that the curse inflicts its curse when it is passed onto someone else in order to save the world.

Shadow Dragon and Mystery of the EmblemEdit

The shield remained in Archanea until Medeus's revival, where the surviving member of the Archanea royal family, Nyna, entrusted it to Marth to use in his battle against Medeus. In Mystery of the Emblem, Marth would obtain the shield once again, this time from Linde, when he began his battle against the possessed Hardin. He would eventually find the missing orbs and have Gotoh restore the Fire Emblem to its true form, the Binding Shield. With the Binding Shield and the Falchion, Marth was able to slay a revived Medeus, and put the Earth Dragons back into the seal. During his defeat, Medeus taunted Marth that the complete shield would be eventually lost due to humanity's greed, but Marth resolved to keep it together.

The curse on the Binding Shield affected Nyna the most heavily during the events of the War of Shadows. First, she was forced to watch as Camus, leader of the Sable Knights fight against Marth's army due to his undying loyalty to Grust and supposedly die. Then she was forced into a loveless marriage with Hardin who was corrupted by Gharnef soon after and was killed by Marth's army in the end. Finally, despite the return of Camus, under the alias of Sirius, her chance of love with him was no longer possible as he not only was already in love with a Valentian woman named Tatiana (who nursed him back to health after he was washed ashore in Valentia after his battle against Marth), but he had come to believe that he would never bring Nyna anything but disgrace and sadness.

In line with the original Archanea version, the curse put on Binding Shield seems to still affect its wielders, even in Awakening. For Emmeryn, she gave Chrom the Fire Emblem before sacrificing herself in order to spare her people from Gangrel and the Plegian army. Though she survived the ordeal through a Paralogue, she suffers from amnesia and never recovers her memories except if she dies after joining the Shepherds. In one future, Chrom wielded the Binding Shield and was killed by his closest ally. Lastly, Lucina in the alternate future inherited the Binding Shield from Chrom when he died along with her mother and the entire first generation Shepherds. She was ultimately unable to acquire the Gemstones and her future was forever doomed.

The shield goes by the name of Shield of Flames and appears as an legendary relic of Aytolis. It was created by the Divine Dragon Queen when she was fending off her counterpart, the Chaos Dragon Velezark. She creates the relic to seal Velezark away, and is associated with her twin dragon fangs, Enliron and Facinna. With the return of the Chaos Dragon, the sacred power of the Shield of Flames is needed once again, however, the power of the five Gleamstones, carried by heroes from the other worlds, must be gathered to awaken the shield.

The Fire Emblem is used by Marth to open chests without a key. After it is upgraded into the Binding Shield it gains the ability to repel Earth Dragons. Contrary to popular belief, it is not needed to wield the Falchion, although Marth and Chrom both wield the two together. The shield also gives Marth +2 for all his stats in New Mystery of the Emblem once all the Gems have been replaced. In Awakening, Chrom wields it, although it has no gameplay effect. 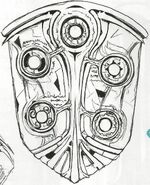 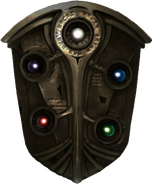 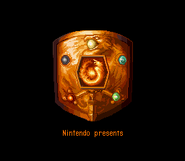 The Binding Shield as it appears in Mystery of the Emblem

The completed Binding Shield in New Mystery of the Emblem along with the Falchion.

The Shield of Flames in Fire Emblem Warriors.

The Binding Shield and the Falchion in Monster Hunter Frontier G.

The Binding Shield in the TCG.

The Binding Shield as seen when Marth activates the Fire Emblem skill in Fire Emblem Heroes.

The Binding Shield in Mystery of the Emblem. 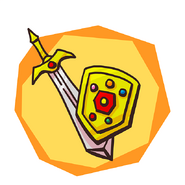