Birth of a Holy Knight

Birth of a Holy Knight 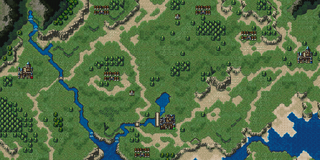 Birth of a Holy Knight#Objectives

Chapter script
[view]
Birth of a Holy Knight is the Prologue of Fire Emblem: Genealogy of the Holy War.

Grannvale rests in the center of the Jugdral continent and was founded by Saint Heim, one of the 12 Crusaders.
Heim's descendants, the Royal Family, were joined by six additional duchies, each with their own Crusader lineage. Each duchy possessed large territory and military holdings, and exercised partial autonomy while serving under the Royal Family.
On behalf of the aging King Azmur, the government was administered by the highly regarded Prince Kurth.
Assisting the prince was his confidant Lord Byron of Chalphy, and Lord Ring of Yugvi. Prime Minister Reptor of Friege felt his position was being undermined. Calling on the avaricious Lord Lombard of Dozel, the two formed a coalition opposing the prince's authority.
The young Lord Arvis of Velthomer, commander of the Royal Guard, had little involvement in governmental affairs. Only Father Claud of Edda could sense the impending crisis.


Just as this drama was beginning to unfold, news of calamity arrived from the east. The peaceful town of Darna, located in the Aed Desert, came under siege by Isaachian barbarians. Reports told of a massive slaughter taking place.
Back in Grannvale, public outcry began to grow, and before long the decision was made to subdue Isaach. Acting on his father's behalf, Prince Kurth departed for the front commanding the lords from each duchy.
There at his side, a warrior in his own right revered for his heroism and bravery, was none other than Lord Byron.

Only a handful of soldiers remained in Grannvale. Owing to a diplomatic alliance with Agustria to the west, and the Verdane Kingdom to the southwest, fear of any kind of aggression was virtually nonexistent.
However, that trust was betrayed all too soon. Verdane Kingdom's massive army, spearheaded by Prince Munnir, crossed into Grannvale territory unnoticed and laid siege to Yugvi Castle. Edain, daughter of Lord Ring, had sole responsibility for the castle. Entrusted with the protection of the kingdom by his father, Lord Byron, Sigurd stayed behind at Chalphy Castle. With only a few soldiers at his disposal, he was rightfully terrified when news of the invasion reached Chalphy.
Sigurd cried, 'Those barbarians aren't laying a hand on Edain!' Having known Edain since childhood, he was left with no other alternative. Sigurd promptly made the decision to take up arms.

Gran calendar – 757. It was this very turn of events that cracked open the door of fate. No one at the time could have recognized this forewarning to the disastrous events to follow.

A large Verdanian force led by Prince Munnir and his subordinate Dimaggio are right outside Yugvi Castle, being protected by Midir. Sigurd learns of this and deploys along with Alec and Naoise, while Arden guards Chalphy Castle.

Munnir defeats Midir, though he was not killed. Edain is then kidnapped, and Munnir returns to Marpha, leaving Dimaggio to defend Yugvi with the force that was present there, as well to attack the villages. He leaves Gerrard, another subordinate, and his forces, in charge of Evans Castle, who have the bridge over the borderline river destroyed.

Shortly after, Azelle and Lex appear northwest of Chalphy and assist Sigurd's small force with magic and axes so as to defend the villages. More time later, Quan and Ethlyn, accompanied by Finn, appear just south of Chalphy, and aid Sigurd with superior skill and healing staves. Sigurd kills Dimaggio and his forces to successfully subjugate Yugvi Castle, and finds out what happened to Edain from Midir, who joins Sigurd and assists with bow along with incredible speed and agility.

Arvis appears as well, dubbing Sigurd a Holy Knight and bequeathing him a Silver Sword. Gerrard finds out about Yugvi falling, and has the borderline bridge put back up, and his forces attack shortly after. But Sigurd's army defeats them and captures Evans, but to Sigurd's dismay, Edain was nowhere to be found.

Birth of a Holy Knight/Script