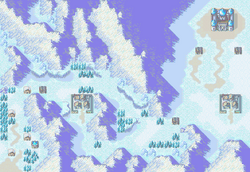 Chapter script
[view]
“After defeating Martel and finding their way out of the forest, The Etrurian Army faced the blizzards common of Ilia's winters. Ilia's harsh climate was a natural defense in itself against invaders. Sigune, Flightleader of the Pegasus Knights that had turned to Bern, was preparing to attack Roy, coupled with Ilia's greatest natural weapon.”
—Opening Narration

Bitter Cold (冬将軍 Fuyu Shōgun lit. The Winter General) is Chapter 19A of Fire Emblem: The Binding Blade if you take the Ilia route (which happens if by the end of Chapter 16, the experience points gained by Shanna and Thea were more than that of Sue and Sin).

The map is very mountainous, so despite the presence of ballistae it is advised to bring at least one flier, especially if they have the Delphi Shield. Immediately direct this flier to the village in the middle of the map to cut back on the time it would take to direct a foot or mounted unit there, eliminate the ballistician along that path as well to reduce the enemy fire power. Send foot units on the path layed out for them, with the bulkier units being set up against the mountainside for the incoming Pegasus Knight assaults. There are status staff Druids that will require mounted units such as Paladins to ride ahead and eliminate, but if the player so wishes they can simply wait out until they run out of status Staves. It is worth noting that their equipment consists only of staves, so they will not fight back and will stop being a threat after they use them up. The fort before the village is the area where most of the ballista fire will be in play, including two Long Ballistae. It may be best to wait this area out and let the enemy deplete their ballistae. However if the player wishes, they can once again send mounted units to dispatch them. Note that there will also be Cavaliers (mainly wielding Steel Lances and Javelins) and Paladins (wielding Silver Lances), as well as Troubadours to support them, so your units will be up against a fair number of enemies, including ballistae. After a set amount of turns Sigune will call for reinforcements, but if she is defeated before then none will arrive.