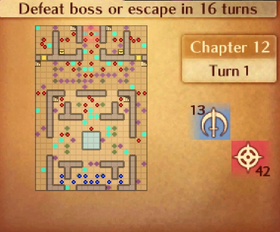 Defeat Boss or Escape in 16 Turns

Bitter Intrigue (昏き企み Kuraki Takurami lit. A Dismal Intrigue in the Japanese version) is Chapter 12 of Fire Emblem Fates in the Conquest Version. This chapter takes place in Palace Macarath. Elise cannot be used in this chapter.

There are various pots labeled as "Medicine" and "Poison" throughout the map. They give the following effects:

The player will need to escape with Corrin in 16 turns, or simply beat Ryoma in battle. This chapter can be relatively hard because of the numerous enemies on the map and the pots which can cause additional grief for the player.

The Dragon Vein makes an appearance in this chapter and will destroy all pots on the map when used. On Normal and Hard Modes, the Dragon Vein is located near Saizo and Kagero, while on Lunatic Mode, is placed just above them, in the reach of some apothecaries. As such, it is very dangerous to use the Dragon Vein on Lunatic, as the nearby poison pots will send a hex down nearby units (including the person who used it) and the nearby Apothecaries won't be frozen and will most likely kill the user if they are not rescued or well protected in time.

Since Elise cannot be used in this chapter (who is most likely your primary healer), you will have to use Jakob or Felicia to serve as your healer during this chapter. However, there are a few Silence using Shrine Maidens which can stop them if their staff hits them, in addition to the potential of nearby poison pots silencing them. The enemy does not hit the pots however, so this should not be much of a worry.

Once you near Ryoma, be prepared to either make a run or fight him. The two samurai that flank him do not attack until your units are very close, and make use of attack stance with Ryoma, often proving fatal to most units in the army. This is preventable by killing them before they have a chance to move adjacent to Ryoma and therefore let him support them. Ryoma himself is considerably dangerous, as his Rajinto means that only Spy weapons (which you will most likely not have/be able to use at this point) will hurt him without fear of retaliation. Vantage will also mean that he will attack first if he falls below half health, and will most likely kill someone if they challenge him. However, if you do manage to defeat him in battle, you will get a free Secret Book and also end the chapter. Ryoma does not move from his spot, giving the player plenty of time to pilfer the chests in the north-east and west of the map.

One way to gain an advantage over Ryoma is to break medicine pots beforehand that give stat boosts. Effie with the defensive stat boosts, a wheat or rice meal from the Mess Hall, and a Guard Naginata or another defensive weapon should be able to take minimal damage from Ryoma and whittle him down. On Lunatic, the higher weapon ranks can also let Camilla or Beruka, wielding a Dual Club, tank him; just be careful of doubling. The pot behind Ryoma reduces Strength and Defense by two, which helps weaken him a little; however, he practically needs to be killed on the same turn as the unit who breaks this pot would both be affected by the stat reduction and also be in range of Ryoma. The pots to the sides of Ryoma increase his defense, resistance, and luck when broken, which makes him harder to defeat. As such, if trying to complete the mission by killing Ryoma, activating the Dragon Vein at the center of the map can hurt more than it can help.

The chest on the right is guarded by paired up samurai as well as a shrine maiden that wields an Entrap staff, potentially spelling death for sufficiently weak units to wander within her range.