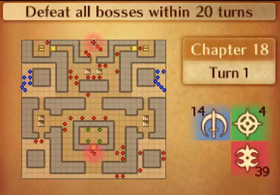 Defeat all bosses within 20 turns

Flora (End of chapter, if My Castle has a level 3 turret)

Black & White (黒白の王子 Kuroshiro no Ōji lit. Princes of Black-and-White in the Japanese version) is Chapter 18 of Fire Emblem Fates in the Conquest Version. This chapter takes place in Izumo.

The player must defeat both Zola and the two commander Generals in 20 turns, or the mission will fail. This chapter is also the first where every enemy is promoted. Their army is divided into two fronts, but it will need to be divided even further to balance a proper striking force against Zola and the commander Generals. The player can also place all or most of their units on one side with pair-ups before the battle for a more unified force.

On Zola's side, enemies consist of a well balanced mix of Heroes and Sorcerers. On Lunatic Mode, all of the Heroes will have Strong Riposte and Sorcerers will have Heartseeker, with Seal Defense/Seal Resistance or Malefic Aura, which can lead to a lot of damage piling up quickly. There is also a Maid who will cause more problems with her Enfeeble staff.

On the south side, enemies consist of cavalry (Paladins, Strategists, Bow Knights) and Generals. Having a strong defense unit can help clear this side easier. Beast Killers and/or Hammers can also clear out enemy hostiles faster in this sector. The Strategists come with Freeze staves. On Lunatic Mode, all of the Paladins have Elbow Room and the Bow Knights have Quick Draw. Every generic General that has two weapons will also have Wary Fighter on them.

Both the Maid and Strategists on the map are static.

Zola himself is not that strong, since his stats are rather poor and he starts off with a Nosferatu tome. On all modes, he simply comes with Duelist's Blow. On Hard mode, he also gets Evenhanded and Vengeance, though he will be unable to use it until he switches to his secondary tome. On Normal mode, his side weapon is a Fimbulvetr, while Hard and Lunatic modes see him use the slightly more powerful Ragnarok tome instead.

The commander Generals, however, are a different story. Their stats are absurdly high for the enemies present on this level. They both have Wary Fighter, and on harder difficulties, get Warding Blow added to their skill roster. On Normal mode, they simply have a Steel Javelin/Star Axe respectively, but on Hard and Lunatic modes, their weapons are changed for the silver tier. It is best to use Armorslayers or Hammers to deal extra damage to them. Magic users can exploit their low resistance, but ensure they can withstand a hit from their weapons before doing so.

There are two chests on Zola's side of the map. The left chest has the Master Seal, while the right one has an Energy Drop. If you are constrained by the turn limit, loot the right chest as stat boosting items are relatively hard to come by, while Master Seal can be bought in bulk once you obtain a level 3 Staff Store.

This applies both Hard mode and Lunatic mode: