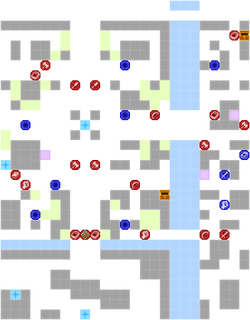 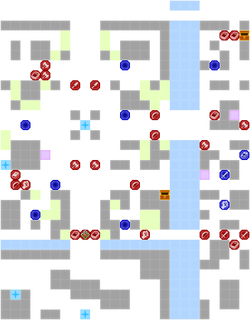 Chapter script
[view]
“It seems Hapi has gone missing. Following a tip from Balthus, your search leads you to the black market in Enbarr.”
—Opening narration

Maddening strategy (these suggestions are all made for an initial play through and does not require a New Game+ file to be successful):

Suggestions: All units deployed be at least level 20 and most or all should be an Advanced class; the reason for this is to have high enough speed to double some enemies, avoid being doubled by enemies, and to have high enough defense to withstand an attack or two. Evasion Rings x2 (these can be acquired during the Battle of the Eagle and Lion main mission by stealing them from the house leaders). At least one tank. Not recommended to bring healers due to the sheer amount of high strength enemies deployed that can finish off the healer in one blow; instead, bring characters that are secondary healers (Hapi as Physic, Byleth has Recover, etc.). Try to have at least three area of effect (AoE) gambits (Blaze, Fusillade) with one use of each saved for the boss at the end.

Personnel: Your team of 10 is scattered and must be deployed thoughtfully. On the right side of the map Byleth, Balthus, and Hapi will already be deployed and cannot be moved. There is one spot north of them to be filled with two mages to the north of that spot and an archer to the south. A unit with high avoid, average resistance, and above average movement works well here (Yuri as a Trickster or Assassin with an Evasion Ring equipped for example).

On the main part of the map to the left there are six spots to fill. A tank unit should be deployed to the far north (Dedue, Edelgard, or Raphael as a Fortress Knight). Directly south of this unit, consider someone with good strength that can hit twice (Grapplers) and take out one of the nearby archers in a single turn. Directly south of this unit, the character sandwiched in between the Grappler and Archer should have good strength and avoid as well (Petra as an Assassin with another Evasion Ring).

To the left of these units there are three more spots to fill. It's highly recommended to deploy two fliers in the two spots in the southwest corner (or personnel with high movement that are not hindered by terrain). The reason is the immediate arrival of reinforcements directly below the southernmost unit after one of the two units in the southwest corner move (Constance, Ingrid, and Flayn all work). Finally, there is a spot to the north of the southwest units to fill and cavalry units with good defense and strength work well.

Battle: Your main strategy should be to eliminate enemies safely while working your way towards the center of the map. When viewing the enemy movements and attack range planes, you should be able to spot enemies that can be attacked with your personnel without fear of being hit by more than one enemy during the enemy turn. Examples include using your tank to the far north to attack the nearest enemy cavalry unit and the two axe wielders to the right of the map near Byleth, Hapi, and Balthus. Don't rush but also don't take too much time as eventually there will be a large amount of reinforcements appearing around the edge of the map. Also, beware that once one of your characters on the right side of the map crosses the middle of either bridge on the way to the center part of the map, reinforcements will appear. For the enemies near your personnel on the southwest corner of the map, consider using gambits on the archer, priest, and grappler and then moving your characters as far away from the reinforcements as possible (this is why fliers work well in this spot due to having Canto and being unaffected by terrain). For the character on the right side of the map to the far north, consider taking these mages out during the first two turns to prevent this character from being overwhelmed when reinforcements appear (Yuri works well with high speed, avoid, good resistance, and being strong with bows). Ignore the boss and his two mages until all the other characters are defeated.

Don't be afraid to progress through the map and get a feel for how and why reinforcements appear then use Divine Pulse to safely backtrack. The battle can feel overwhelming at times, especially when reinforcements appear, but if you've continued to move your personnel to the center of the map and away from where the additional enemies appear on the edges of the map, you should be able to safely clear out all enemies before approaching the boss.

Reinforcements: a group of four axe wielders will appear on the western edge of the map; three cavalry units and a mage will appear to the north; an assassin and a sword wielder appear in the garden area where the archer and grappler were at the beginning of the battle; mages, archers, and more sword wielders appear to the east in two groups.

When you get to the boss and the two mages accompanying him, it's recommended to only deploy one of your characters to aggro the enemies and keep the rest of your group a few spaces back. The reason for this is it's almost guaranteed one of the mages will use a gambit with a large AoE to whoever is in range and you don't want the majority of your squad weakened and immobilized when fighting the boss. The mages are easy enough to take out with grapplers and Baron Ochs isn't difficult to kill with spells, bows, or other ranged attacks.

Once Baron Ochs is defeated, he'll transform into a flying demonic beast. Gambits and bows will easily break its armor and then you can unload on it.