Salvage Blow, Lancebreaker
[view]
The Blacksmith (鍛冶 Kaji) is a combat physical class introduced in Fire Emblem Fates. One of the possible promotions of the Oni Savage class, Blacksmiths wield Clubs and Katana as their weapons of choice and are treated as a Hoshidan class.

Coming from the Oni Savages, the Blacksmiths bring several differences in tow from their counterpart, the Oni Chieftain. In stark contrast to the Oni Savages and Oni Chieftains, Blacksmiths have decent Skill on par with fellow Axe-proficient Berserker and slightly above average Speed, but they will have to give up on improving upon whatever Magic that they might have obtained before promotion. Their Strength, Defense, and Resistance are all inferior to the Oni Chieftain's in terms of stat base, stat cap, and growth, including a non-existent Magic growth and bottom stat in that area, but the aforementioned increased Skill as well as the increased HP and Luck caps are welcome replacements. These stats and weapon choice mark them as the Hoshidan equivalent of the Nohrian Hero, but are more experienced with Axes instead of Swords and exchange varying degrees of Skill, Speed, and Luck for additional HP, Strength, and Defense.

While Blacksmith's B rank proficiency with swords prevents them from using weapons like the Brave Sword and Venge Katana, they are still able to utilize most swords without difficulty. Their A rank proficiency with axes allows them to use the Brave Axe in battle. Their relatively high Skill also means that they can land their hits more reliably compared to the Oni Chieftain.

The only issue with Blacksmiths are their astoundingly low Resistance like the Oni Savage, making them more vulnerable to magical attacks compared to the Oni Chieftain. They are also weak to ranged units, and as physical units they are forced to use thrown weapons to retaliate back against distant enemies which usually causes a plethora of additional weaknesses which can be further exploited.

Blacksmiths can learn both Salvage Blow and Lancebreaker at level 5 and 15 respectively. Salvage Blow is somewhat redundant due to its lack of use, as it is triggered based on their Luck and it only yields iron Hoshidan weapons when triggered, which are relatively cheap from the Armory. Lancebreaker allows Blacksmiths to shut down any lance-wielding units easily. If reclassing is not an issue, they may obtain Death Blow and Counter from the Oni Chieftain class to further boost their physical prowess, especially against lance users.

All in all, the Blacksmith is quite the viable physical class, especially for an axeman/clubsman, but just like the Oni Chieftain and Hero they must be very wary of the Magic users abound due to the lack of an effective counter. While having more reliable hitrates compared to Oni Chieftain, Blacksmiths are not as effective combat units due to their overall lower stats. With that said, the Blacksmith can still dish out high amounts of damage while withstanding a number of hits.

The Blacksmith class can be seen wearing the basic Oni Savage class's outfit underneath their new outfit additions (sans the previous oni mask, arm guards, and prayer beads). The new additions are the long sleeveless jackets leaving the torso exposed, rectangular armor plating on their shoulders and much larger armor plating completely covering the forearm and the back of the hand, a pair of katana kept tied up on the back of the Blacksmith's outfit, and a metal forging mask with a visor, small horns similar to an oni's, and fabric draping from the sides of the mask likely to prevent burning/heating.

Concept art of a female Blacksmith from Fates 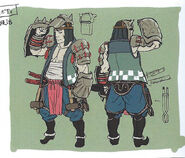