Canto
[view]
The Blade Paladin ( Bureido naito, lit. Blade Knight in the Japanese version) is a horse-mounted combat physical class that appears exclusively in Fire Emblem: Radiant Dawn. The promoted form of the Sword Knight class, Blade Paladins, like their name suggests, wield Swords as their sole weapon of choice.

The class's first and only appearance is in Radiant Dawn. It is the promotion of the Sword Knight.

In Vestaria Saga I, the Blade Paladin is known as the Lion Knight. It is no longer restricted to one weapon as it now wields both Swords and Greatswords.

Blade Paladins tend to not fight as well as Paladins who wield other weapons, as Lance users are more abundant than Axe users in Radiant Dawn.

Concept artwork of the Blade Paladin class from Radiant Dawn. 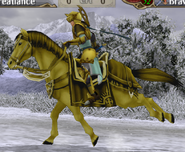