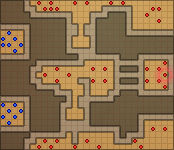 Chapter script
[view]
“After defeating Lady Mikoto, Corrin learns that Mikoto was originally Valla royalty. The army then proceeds into the twisted maze leading to the castle.”
—Opening Narration

Blades Drawn (魔剣士再び Ma kenshi futatabi The Return of the Demon Swordsman) is Chapter 25 of Fire Emblem Fates in the Revelation Version. This chapter takes place in Castle Valla: Labyrinth.

The map consists of three separate chambers that can only be accessed via a pair of rooms that function similarly to automated gondolas. In order to access the boss, the player must activate three Dragon's Veins, with one Vein being located in each chamber.

The player may halt the motions of either of the movable rooms by positioning a unit on top of the entrance,and doing so will often be necessary to prevent units from getting stranded from the rest of the army, an outcome which could prove fatal. If a deployed unit has Replicate, the player can activate the skill and leave the Replica at the entrance while sending out the original to fight or heal, though logically they must take care not to get the original killed.

All of the enemies featured in this map are of Hoshidan classes.