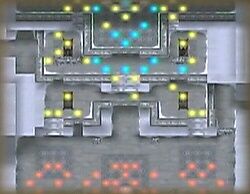 Daein launches a surprise attack against the apostle's army, devastating her forces. It is all Apostle Sanaki can do to allay her remaining troops' burning desire for revenge. She knows that there is no hope of victory if her weakened forces are divided. However, she cannot move forward while danger follows at her back. This dilemma weighs heavily on the apostle's troops, crushing their morale. Meanwhile, the Daein forces pull back to the fastness of Nox Castle. Micaiah, unable to explain her mission to her soldiers, keeps Daein's army together through sheer force of will.

Blood Contract is Chapter 3-13 in Fire Emblem: Radiant Dawn, and the third to be played from Daein's perspective. It is notorious for being the only chapter where Ike and the Greil Mercenaries are the enemy (as well as numerous Laguz). It is important to note that even if Ike, Ranulf, or any of the Greil Merceneries are defeated, they will still return later.

You have a choice: either you hold the line (the green line that Micaiah cannot cross) for 12 turns, or you kill the enemy commander, Ike, before the twelve turns run out. The latter is usually considered extremely hard to accomplish and should only be done by the most advanced players, but with certain preparations it can be done. Firstly, you'll want to make sure your team has at least two well trained units (nearing promotion to third-tier or already at third-tier) that are well equipped with Silver, Killer or Brave weapons, high-level magic tomes, and/or numerous skills. If you have trained any units in the Greil Mercenaries, be very wary of them, as they could be dangerous. To best isolate Ike from the other mercenaries, you might want to wait until the very last turn to put your plan into action, as this is when Ike himself advances towards the central ledge along with Ranulf. Have your trained units await him on top of this ledge. When he walks far enough into range, he should be an easy target for a Sleep staff. Once he is asleep, he will be vulnerable to any and all attacks. Have your units either jump down and take care of him or stay on the ledge with a ranged weapon and attack (don't worry about being left open to enemies, as defeating Ike will instantly end the chapter). Don't even think about defeating him when he is awake because his Ragnell can easily destroy your units. Also, don't worry about Ranulf. If you have the Beastfoe skill, he should go down quickly. The other mercenaries should be advancing up the left and right, but you don't need to bother with them if you don't want to.

If you wish to take down Ike before the rest of the Greil Mercenaries (and Ranulf) arrive, put Ike to sleep, then defeat him before the enemy phase arrives and Soren obliterates the nearest of your allies.

If you decide to hold the line, make sure that your first priority is to kill any and all Hawk Laguz, otherwise they will destroy your units and kill the frail Micaiah.

Firstly, before moving anyone, you might want to set your allied AI units (the yellow army) to "Halt", so as to maintain a shield for each ledge and opening. Also, take two units that you are not using and place them in front of the pit at the top-left hand corner of the map, blocking it off (enemy Laguz units appear here later on, make sure you do this). Place two units atop the central ledge near the front of the map (along with the allied Halberdier, if your're not moving him) to block off any Laguz attempting to jump up (optionally, they can have ranged weapons to ward the enemy Laguz off). Nolan with Beastfoe and a crossbow will wreck anything that gets close. You'll want to have two decent units at the left of the map at the stairs to ward off more Laguz infiltrators, and two decent units plus two units you may not be using (be careful with this) at the right of the map (two to ward off laguz,two to block the pit, where more enemy Laguz appear later). Have Micaiah and Laura heal you units with Physic staffs, and you can also have Micaiah hitting enemys with her newly acquired Purge tome (if she can wield it, that is). This (and the Sleep staff) are best kept for an emergency, such as if an enemy Hawk gets too close to your defensive line. Keep this up until around turn 10, where the mercenaries appear. If they're untrained, you could try to defeat them. If they are trained, you may want to start heading for the back of the map.

This chapter is a key chapter for two reasons: it explains how Ashnard accessed the throne (by way of a Blood pact) and also an attempt at getting rid of the curse of a Blood Pact.