View source
watch 50:49
'Fire Emblem: Path of Radiance' - Chapter 11
Do you like this video?
Play Sound 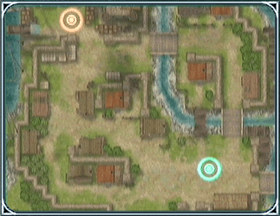 Nephenee, Brom, Kieran (turn them into Ally Units in the previous chapter and they must survive that chapter)

Zihark (Enemy, talk to with Lethe or Mordecai)

Chapter script
[view]
“What's with this place? The people are going about their business. Why aren't they worried about Daein? About the war?”
—Ike