Blood of the Eagle and Lion (Azure Moon)

Blood of the Eagle and Lion 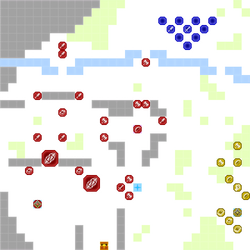 Chapter script
[view]
“The Kingdom army departs from the Great Bridge of Myrddin and marches south toward Enbarr, the Imperial Capital. Meanwhile, the Alliance army follows from behind to invade Imperial territory, and the Empire has dispatched forces from Fort Merceus to intercept them. The curtain is rising on a conflict between the three armies, which will come to be known as the Battle at Gronder, held on the same plains that witnessed the Battle of the Eagle and Lion.”
—Opening narration

Gilbert reports that Imperial forces are gathering at Fort Merceus, commanded personally by Edelgard. The group decides to request reinforcements from House Charon and attempt to ally with Leicester. As the Faerghus army prepares to confront Adrestia at Gronder Field, Rodrigue discusses the Tragedy of Duscur with Gilbert and reveals that there was no evidence that Dimitri's stepmother Patricia was killed in the event. While Gilbert believes she was captured alive, Rodrigue speculates she may have had a hand in orchestrating the massacre. An allied soldier reports that the Kingdom messenger to Leicester was brutally murdered, and Byleth and Dimitri speculate that the Empire may have sabotaged their request for aid.

The next day, the Kingdom army marches to Gronder Field and confronts the Imperial and Alliance forces. A massive three-way battle ensues that will eventually come to be known as the Battle at Gronder, and Faerghus emerges victorious. As Edelgard escapes, Fleche appears and attempts to attack Dimitri. Rodrigue jumps in the way of her attack and is mortally wounded, giving Byleth the opening they need to kill her. Rodrigue asks Dimitri to find a reason to live before dying in his arms, much to the latter's horror. Afterwards, a broken Dimitri attempts to set off for Enbarr on his lonesome, but is stopped by Byleth. Byleth asks Dimitri to forgive himself for his actions up to this point.

If the Alliance forces are triggered to advance

This map can be extremely challenging if you immediately attempt to take the center of the map with the ballista with Bernadetta/Empire Sniper. If you have played this map before and attempted this, you likely discovered Edelgard sets fire to the center of the map and on top of the that, the Alliance flanks you to the rear with Hilda/Alliance Warrior with two Pegasus Knights and to the east with Leonie/Paladin. This will also lead to the Empire approaching from the west with your team trapped in the middle and your low movement personnel, who are typically your most vulnerable units, at the mercy of Hilda and high speed Pegasus Knights. This strategy will prevent this entirely.

As soon as the map starts, use Stride on your low movement units, then head west through the forest area. Have one of your swords units (Levin Sword+ if you have one) kill the closest Empire Fortress Knight on your way to the woods. Do not cross the closest bridge.

During the enemy turn (Turn 1) Edelgard will order the two closest cavalry units to approach, but due to the terrain (woods and wasteland) their movement will be hindered. The Alliance will hold. During turn 2, safely finish off these two cavalry units as you continue to make your way through the woods. You will likely find it is difficult to make it through this terrain quickly but the movement combat arts can speed up this process. If you have two units that have the Stride gambit, feel free to use this ability again to get through this area quickly.

For turns 3-5, use your high avoid characters with strong equipment (Seteth with the Spear of Assal works wonders and Ingrid with Gradivus or Luin also works great) to aggro the two closest cavalry units to the second bridge as well as the Empire Pegasus Knights. If you are efficient in defeating these enemies and you have been grooming Ingrid as a mage killer (hint hint), you will likely have an extra turn (any turn before the enemy turn during turn 6) to swoop in and kill off Hubert, who will make a comment about you abandoning the center area when you attack him (this confirms you are doing this correctly). You can also draw the nearest demonic beast towards your squad and deal with it. Continue to avoid the center area and stay out of range of Bernadetta/Empire Sniper at the ballista.

During the enemy portion of turn 6, the Alliance reinforcements that have Hilda and Leonie will arrive and the entire Alliance squad will begin their approach towards the center of the map. During turn 7, continue to stay out of range of the ballista.

During the enemy portion of turn 7, Edelgard will announce the battle is not going as she planned and will order the premature destruction of the center ballista. The Empire and the Alliance will begin attacking each other (which includes the Empire demonic beast if you aren’t too close to it). Despite the center of the map becoming an inferno, the Alliance will continue to approach it and take fire damage from the terrain.

While your enemies burn, lose health, and kill each other (fist pump), use Impregnable Wall on a few characters (keep your Restore unit out of this) and aggro Edelgard towards you. She may or may not use her Gambit, but if she does, use Restore on your next turn to cure your affected personnel.

Edelgard is not difficult to defeat and in fact, having Annette with the Crusher Hero’s Relic and the Combat Art Dust may be enough to kill her in one blow. If not, use a Gambit or two or some combo of Sublime Heaven, Windsweep, Atrocity, etc.

The only thing left to do now is defeat Claude. It is not required to defeat the remainder of the Alliance squad unless you just want the experience. Use the same approach as Edelgard: use Impregnable Wall and then aggro Claude towards your squad. If he uses his Gambit, use Restore, then finish him off with Combat Arts like Windsweep, Hunter’s Volley, and Atrocity.