Start a Wiki
Blood of the Eagle and Lion (Azure Moon) 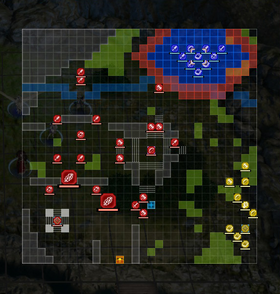 Chapter script
[view]
“The Kingdom army departs from the Great Bridge of Myrddian and marches south toward Enbarr, the Imperial Capital. Meanwhile, the Alliance army follows from behind to invade Imperial territory, and the Empire has dispatched forces from Fort Merceus to intercept them. The curtain is rising on a conflict between the three armies, which will come to be known as the Battle at Gronder, held on the same plains that witnessed the Battle of the Eagle and Lion.”
—Opening Narration

Note that if Hilda wasn't recruited, she will appear in place of the one warrior.