King of the Northern Kingdom of Thracia

Baron
[view]
“Hmph, you idiot! You're the one that will die!!”
—Battle Quote with Leif

Bloom is a boss character in Fire Emblem: Genealogy of the Holy War; he also makes a brief cameo appearance in Fire Emblem: Thracia 776. He is the Duke of Friege in the second generation of the Genealogy of the Holy War, the eldest son of Reptor, and wields the legendary Mjölnir spell. He is married to Hilda and has two children, Ishtar and Ishtore.

Bloom takes after his father Reptor, in which he is tyrannical and rules with an iron fist, making him an utterly detestable individual. Despite possessing the power to shield his sister Tailtiu and Ethnia from Hilda's atrocious abuse, Bloom opted not to interfere as a political maneuver to punish traitors, especially one that brought about his father's death. He did, however, take good care of Tine and Linda, remaining a relatively strict father figure to her. Tine is observed to remark on that Bloom is not completely evil, as compared to his wife.

Thracia 776 also reveals that, unlike Hilda, Bloom abhors the Child Hunts. He was constantly being pressured by other nobles to participate in it, but despite not doing anything to stop them (unlike Ishtar), he remains doubtful to give a definite reply. It is also revealed that he cared deeply for his son, Ishtore, whose death took a toll on him and worsened his temper due to grief.

Bloom appears in Chapter 7 as the protector of Alster Castle at the start of the chapter. He leaves the gates around the castle bolted tight until Melgen is conquered, and is thus not an immediate threat. He does have 4 leadership stars over two groups of 6 sword armors, a thunder mage, and a 1-star General attacking Leonster. Before Melgen is conquered, it is recommended to have Leif and Nanna engage the enemies in battle, and leave the castle's defenses to Finn. Fee/Hermina may also be sent from Seliph's main forces in Ribaut to assist them.

Bloom is protected by Darna, Tine/Linda and the Mage Sisters. Upon dealing with these obstacles, the player will be able to face him in battle. Bloom wields the holy Mjölnir tome and possesses 16 Magic, and will thus be able to inflict high amounts of damage upon the player's units. Additionally, Bloom possesses the Great Shield skill, which will activate fairly frequently as a result of his high level.

The player may use Shannan to face off against Bloom with a lucky Shooting Star Sword skill. Alternatively, the player may try to use hit-and-heal strategies for all units that are able to survive at least one blow. If Arthur inherits the Forseti tome from Lewyn, the battle can be easily won with a counterattack after being hit by the Mjölnir.

In Chapter 8, Bloom is noticeably weaker without the Mjölnir, and is thus slightly easier to defeat. However, the player should realize that he still has the Great Shield skill. He may also use Thunderstorm, which can pose a threat to your units too.

“Heheheh... As long as I have my Mjölnir, I'll never be scared of you little brats!”
—Bloom's battle quote in Chapter 7

Bloom is a common surname, and is also a substantive that means "flower" and "blossoms".

Bloom, as he appears in the second series of the TCG as a Level 1 Baron.

Bloom's portrait in Genealogy of the Holy War. 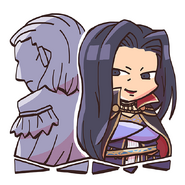