Bishop in service of Archanea

BS Part 1: Fall of the Palace

He joins the player's army automatically in Chapter 12 along with Midia, Dolph, Tomas, and Macellan.

After the War of Darkness, he returns to Archanea's service. It is revealed in the sequel that Boah is indirectly responsible for the events of the game as he wanted a King for Archanea and pressured Nyna to pretend to love Hardin and propose marriage to him. Despite the best efforts of him and Nyna, Hardin finds out which leads to his depression and corruption. Boah stays in the palace even when Hardin becomes corrupted. He eventually is gravely wounded by Hardin for aiding Nyna, but he lives long enough to explain to Marth how Hardin fell under Gharnef's control and says he is sorry for his mistakes and only wants Nyna to be safe.

While not directly stated, it is heavily implied that he died from his wounds after talking to Marth.

Boah is one of the best options for magic that the player has available. With a Weapon Level of 10 and a Speed of 15, Boah can wield anything the player gives him, and double the vast majority of enemies with powerful tomes like Thoron. Boah's extreme Speed will make him competitive with even raised magic units like Merric, and it is actually higher than Wendell's by a single point. When wielding Starlight at base, Boah can actually double Gharnef and kill him in three hits, making him a strong option for defeating the Dark Pontifex. Boah's growths are terrible, and his durability is somewhat lackluster, but he works well as either a solidly effective midgame magic unit or a support character with staves.

The Book 1 incarnation of Boah has taken some serious blows since his NES days, with his most pivotal loss being five points of Speed. The enhanced power of mages like Merric and Linde also make his niche somewhat more competitive, making him no longer the powerhouse he once was. Nonetheless, Boah remains an excellent staff unit, and is at least capable of survival in a fight when given decent equipment.

Boah has very low base stats, and his growths are terrible as well. However he has C rank in staves and B rank in Tomes, which allows him to use the Warp staff and Excalibur at base. Both of them give him a niche and make him a serviceable unit for supporting the team. His only notable reclass option is Sage, which gives him slightly higher magic and tome rank, but it lowers his resistance stat and his staff rank drops below C. If one wishes to use Boah immediately to Warp, it is best to keep him as a Bishop. He is very comparable to Wendell, but without Wendell's Speed.

Boah resumed his duties as Archanea’s royal bishop, guiding the kingdom while its people got back on their feet.

Boah as he appears in the TCG. 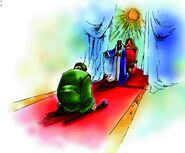 Boah is ordered by the King to get Nyna to safety

Boah's portrait in Shadow Dragon and the Blade of Light.

Boah's portrait in Mystery of the Emblem.