Chris Hackney
[view]
“Times like that, it really hits home how we were born into different stations. Me, I just go through life focused on whatever’s right in front of me. ”
—Boey in Echoes: Shadows of Valentia

Boey is a playable character from Fire Emblem Gaiden and its remake, Fire Emblem Echoes: Shadows of Valentia. He is 16 years old.

Boey is the son of a fisherman and an eager apprentice Mage who is devoted to Celica's protection. He is like a younger brother to his childhood friend Mae, who constantly teases him. He joins Mae and Celica out of concern for the two of them.

After the war, he stays with Mae, finding happiness in their bickering. In the remake, they are also eventually wed and bore children.

Boey, growing up in an impoverished household, is very insecure of himself, but because he values his impression on others, he tends to talk in formal speech mannerisms and highly of himself to overcompensate his image. However, he is more bark than bite, and is terrified easily, especially in regards to Necrodragons. As a result of said cowardice, Boey does not actively enjoy engaging in battles. He speaks in a very calm, refined, yet often condescending manner, however, he has been shown to act rather moody. Due to his efforts being focused into said overcompensation of abilities in his speech mannerisms, he is not adept at confronting his own feelings while hiding behind his serious and mature front.

Boey, like Mae, is a unit that starts off decent when you get him at the beginning of Celica's route. He quickly learns the Thunder spell, making him a 3 range unit just like Mae. Mae starts off being a more potent offensive unit than Boey when you get him, and Boey will continue to fall behind her and other Mages in usefulness as it takes him a long time to learn his more potent spells as well as grow into his niche.

Part of Boey's problem is that he starts off with very low base Speed that will never get fixed due to his abysmal Speed growth. However, Boey does have one significant advantage over other Mages, and that is that he is the most durable of all of them. He has very high HP growth for a Mage, and the highest Defense growth among all Mages (he is even tied with Kliff, Tatiana, and Saber for the 2nd highest Defense growth among all units, with only Est's being superior). The high HP is certainly nice to offset the HP that is deducted when casting spells, but the better Defense and HP advantage is somewhat diminished by his low Speed since virtually every enemy in the game will Double Attack him, and it takes time for his Defense to become respectable enough for this perk to really become apparent. In all though, Boey eventually gains enough Defense and HP at higher levels that he becomes Armor-esque in his ability to withstand physical attacks, winding up surpassing even many of your physical units in this regard.

Boey is a very odd unit. He has great bases in attack, luck, and resistance, mediocre defense, and bad skill and speed. This speed base hampers his usefulness long run, as his average 30% speed growth can make him so slower than a snail if RNG is not happy. However, if his speed grows decently enough, he can be amazing with his strong attacks, long range spells, and his defensive bulk. If he is given the speed boosts from the beginning of chapter 2 and a pegasus cheese later on, Boey might even be able to double the later monsters. Excalibur is good for doubling faster foes, but he likely won't be able to make great use of it. As for reclasses, the most attractive options are archer and cavalier, not only because of the drought of those classes in Celica's route, but because Boey will perform greatly in them with his high attack, defense, and skill growths. However, he will still run into doubling problems, but they will matter less when Boey is taking 1 damage from endgame enemies. Overall, Boey is an odd mage but with enough luck, he can be a great long range attacker and a decent tank.

Skillful Survivor
A mage from Novis who grew up dirt-poor. Of calm demeanor, but not great at magic. Appears in Fire Emblem Echoes: Shadows of Valentia.

Boey is an unusual mage as he is lacking in Atk leading to a weak damage output with his average Spd and has low Res that makes combat against other mages difficult, even against blue ones. He does, however, sport a solid physical bulk which allows him to wall units and perform competently in a defensive wall build.

His stat orientation actually perfectly suits his innate Gronnowl tome which boosts his four main stats by 2 times the number of allies adjacent to him when in combat. This requires team positioning coordination to execute properly and can reach very high bulk thresholds. With recent updates, he obtained the Inscribed Tome, which is basically a Raven tome with added might, giving him advantage against colorless physical foes. When special refined, he gains a physical Close Counter, it's only restriction being that of dragon units.

Ignis takes 80% of his Def and adds it to his damage when it activates. While slow charging, he can add a decent 24 additional damage with his neutral 32 Def. Earth Boost increases his Def by 6 if he has at least three more HP at the start of combat. He has a decent HP which does put him above several units to make the most of this skill, but he has better options. Renewal gives him 10 HP regeneration every two turns, helping with his bulk so he can better wall against enemies. It is a solid option for budget builds as his best desired defensive skill is locked to 5 star units.

Boey struggles against fellow mages, even some blue ones, and staff units due to his low Spd and Res. Sanaki, Katarina, Reinhardt, Ophelia, Nino, and Brave Veronica are among the many, but particularly high tier ones, that effectively dispatch Boey. Even when running against direct physical units, whom he better resists, he stands little chance against Red units who have the color advantage including Ayra, Zelgius, and Legendary Ike, especially units like the latter two who can also counterattack if he want to initiate on them in a pinch. Dragon units are able to target his lower Res, leaving him most vulnerable to them, especially both Red Tikis, Garon, and Halloween Myrrh

Boey’s initial set can be improved to maximize his bulkiness and create a solid wall unit, though most of his desired skills are expensive.

Preferably, Boey should give his Gronnowl a Spd refine just to prevent as many units from doubling him as possible. Draw Back is a standard mage support skill to pull allies out of danger, but he can also run Reposition to move allies out of danger and place himself to bait specific units that he can wall. Bonfire has a faster cooldown and even though he receives a 16 damage boost instead, he is more likely to activate this one than Ignis.

Close Counter expands his countering range so that he can check a handful of blue physical units. Fury is a budget option that gives him a flat stat boost to the four core stats, but with the penalty of recoil which can be addressed if keeping Renewal or running Reciprocal Aid, both of which keeps his health topped. Quick Riposte shores his Spd problems to guarantee that he has a double attack available. Spur skills work great since he will want to stick close to allies to use Gronnowl’s effect, though he can run whatever he desires. He can either take Threaten or Smoke skills to lower enemy stats, mainly the Atk variants so he can wall against them better, though Res variants grant him better damage output while Spd variants prevents a few more enemies from achieving a double against him.

(If Mae is alive)
After returning to the priory on Novis, Boey weathered a trying courtship with Mae until the two were wed. Children came soon and in plentiful number, giving the pair a host of new excuses to argue. Joy takes curious forms at times, but Boey was a happy man indeed.

(If Mae is dead)
Only after losing Mae did Boey realize the nature and intensity of his feelings for her. Wracked with regret, he poured himself into his work, ultimately succeeding Nomah as high priest of the priory. He spent his life there aiding the poor in humble—yet rewarding—service.

Boey is illustrated in the trading card game Fire Emblem Cipher with the following cards: 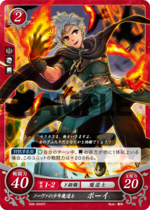 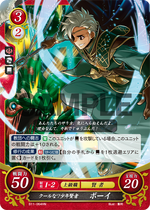 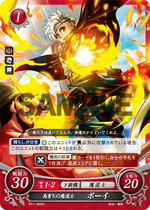 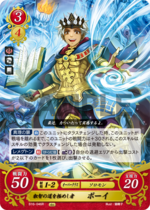 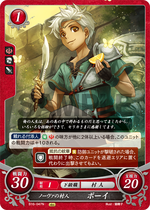