Chris Hackney
[view]
“Times like that, it really hits home how we were born into different stations. Me, I just go through life focused on whatever’s right in front of me. ”
—Boey in Echoes: Shadows of Valentia

Boey is a playable character from Fire Emblem Gaiden and its remake, Fire Emblem Echoes: Shadows of Valentia. He is 16 years old.

Boey is the son of a fisherman and an eager apprentice Mage who is devoted to Celica's protection. He is like a younger brother to his childhood friend Mae, who constantly teases him. He joins Mae and Celica out of concern for the two of them.

After the war, he stays with Mae, finding happiness in their bickering. In the remake, they are also eventually wed and bore children.

Boey, growing up in an impoverished household, is very insecure of himself, but because he values his impression on others, he tends to talk in formal speech mannerisms and highly of himself to overcompensate his image. However, he is more bark than bite, and is terrified easily. As a result of said cowardice, Boey does not actively enjoy engaging in battles. He speaks in a very calm, refined, yet often condescending manner, however, he has been shown to act rather moody. Due to his efforts being focused into said overcompensation of abilities in his speech mannerisms, he is not adept at confronting his own feelings while hiding behind his serious and mature front.

Boey, like Mae, is a unit that starts off decent when you get him at the beginning of Celica's route. He quickly learns the Thunder spell, making him a 3 range unit just like Mae. Mae starts off being a more potent offensive unit than Boey when you get him, and Boey will continue to fall behind her and other Mages in usefulness as it takes him a long time to learn his more potent spells as well as grow into his niche.

Part of Boey's problem is that he starts off with very low base Speed that will never get fixed due to his abysmal Speed growth. However, Boey does have one significant advantage over other Mages, and that is that he is the most durable of all of them. He has very high HP growth for a Mage, and the highest Defense growth among all Mages (he is even tied with Kliff, Tatiana, and Saber for the 2nd highest Defense growth among all units, with only Est's being superior). The high HP is certainly nice to offset the HP that is deducted when casting spells, but the better Defense and HP advantage is somewhat diminished by his low Speed since virtually every enemy in the game will Double Attack him, and it takes time for his Defense to become respectable enough for this perk to really become apparent. In all though, Boey eventually gains enough Defense and HP at higher levels that he becomes Armor-esque in his ability to withstand physical attacks, winding up surpassing even many of your physical units in this regard.

Boey is a very odd unit. He has great bases in attack, luck, and resistance, mediocre defense, and bad speed. This speed base hampers his usefulness long run, as his average 30% speed growth can make him so slower than a snail if RNG is not happy. However, if his speed grows decently enough, he can be amazing with his strong attacks, long range spells, and his defensive bulk. If he is given the speed boosts from the beginning of chapter 2 and a pegasus cheese later on, Boey might even be able to double the later monsters. Excalibur is good for doubling faster foes, but he likely won't be able to make great use of it. As for reclasses, the most attractive options are archer and cavalier, not only because of the drought of those classes in Celica's route, but because Boey will perform greatly in them with his high attack, defense, and skill growths. However, he will still run into doubling problems, but they will matter less when Boey is taking 1 damage from endgame enemies. Overall, Boey is an odd mage but with enough luck, he can be a great long range attacker and a decent tank.

Skillful Survivor
A mage from Novis who grew up dirt-poor. Of calm demeanor, but not great at magic. Appears in Fire Emblem Echoes: Shadows of Valentia.

(If Mae is alive)
"After returning to the priory on Novis, Boey weathered a trying courtship with Mae until the two were wed. Children came soon and in plentiful number, giving the pair a host of new excuses to argue. Joy takes curious forms at times, but Boey was a happy man indeed."

(If Mae is dead)
"Only after losing Mae did Boey realize the nature and intensity of his feelings for her. Wracked with regret, he poured himself into his work, ultimately succeeding Nomah as high priest of the priory. He spent his life there aiding the poor in humble—yet rewarding—service."

Boey is illustrated in the trading card game Fire Emblem Cipher with the following cards:

Artwork of Boey in Fire Emblem Heroes by Aoji. 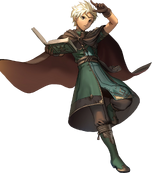 Artwork of Boey attacking in Fire Emblem Heroes by Aoji.

Artwork of Boey activating a skill in Fire Emblem Heroes by Aoji. 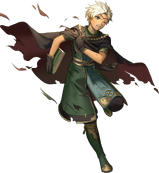 Artwork of Boey injured in Fire Emblem Heroes by Aoji.

Boey as a Mage in Fire Emblem 0 (Cipher).

Boey's battle model as a Mage in Echoes: Shadows of Valentia.