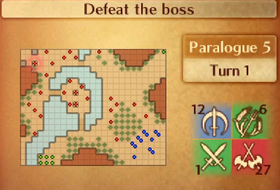 Nichol (Must be captured)

Chapter script
[view]
“Silas's daughter, Sophie, is carried from her Deeprealm by her horse. She discovers a bandit attack on a village and decides to fight to protect the villagers.”
—Opening Narration

Bold Approach (心通うとき When Heart Attend in the Japanese Version) is paralogue 5 of Fire Emblem Fates.

This paralogue will be unlocked once Silas has obtained an S-Support with a female character.

This is a rather simple defeat the boss level, with the addition of six villagers in the south-eastern area of the map. The villagers will attempt to flee but run toward a large group of enemies to their likely death as they do not carry any weapons to retaliate and have very poor defense, nearly always resulting them being killed in one hit. The exit point they head to is located right behind Nichol; if they make it to the exit point, they exit the map permanently (and are counted as saved villagers).

Having high movement units is recommended to clear out the enemies as fast as possible, or head straight for Nichol and either capture or kill him (the player can get him if they want from the DLC Museum Melee, where his stats are slightly better). Capturing him should be easy in both versions, since both Niles (especially him) and Orochi has enough resistance to tank his mediocre magic. Rescue staves can be used, but since they are rather rare to obtain and have limited uses, it's better off to rush Nichol or kill all the enemy units as fast as possible to get the side rewards.

On turn 11 and 17, two wyvern units will appear, and the one on the left will always be a Wyvern Lord. In Lunatic, even before Chapter 10, said Wyvern Lord have bases comparable to lategame powerhouses such as the royal brothers of each version (Xander has basically the same bases as the wyvern lord except a higher luck, inferior lance rank and a potential inferior join time) and maxed weapon ranks, therefore it is recommended to capture one of them (or even two if you don't want Nichol), especially in Conquest.