Bolganone (ボルガノン Boruganon, translated Volganon in some Japanese versions and Volcanon in some fan translations) is a recurring Fire magic tome in the Fire Emblem Series. When cast, this spell will forcefully open up a fissure into the surface of the earth, and trigger an eruption to occur, incinerating the selected enemy target. While this tome is not as versatile as the C-rank Meteor tome, it is much more accurate and durable.

In Path of Radiance and Radiant Dawn, the Bolganone tome is highly effective against Beast tribe Laguz.

Bolganone is used by Robin in Super Smash Bros. for Nintendo 3DS and Wii U. They will equip this tome at the end of their Final Smash, Pair Up, to spike the enemy to the ground.

Bolganone is also used as a spell by Linde in Fire Emblem Warriors as her Strong VI attack, which is only available to her after promoting to Sage and creating the Combo IV Crest to unlock it.

The Bolganone tome, as it appears in the second series of the TCG.

Artwork of the scroll of Bolganone from TearRing Saga: Utna Heroes Saga.

Animation of Yodel casting Bolganone on Sirius in Mystery of the Emblem.

An enemy Sage casting Bolganone on Boyd in Path of Radiance.

Sanaki casting Bolganone on an enemy Warrior in Radiant Dawn.

Linde casting Bolganone on an enemy in Shadow Dragon.

Yodel casting Bolganone on Etzel in New Mystery of the Emblem. 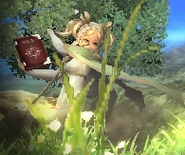 Lissa wielding the tome of Bolganone in Awakening.

Laurent casting Bolganone on an enemy Knight in Awakening.