When cast, a single bolt of lightning will be drawn upon from overcast rain clouds, striking a selected enemy target located a considerable distance from its caster. The long range that this tome possesses is essentially offset by its inability to allow its user to attack at close range, leaving him/her vulnerable to enemy assaults. This is further made worse by the fact that the tome is one that is rather heavy, which not just impedes the user's ability to perform double attacks, but also reduces his/her Attack Speed by a significant amount. An exception of this is in Fire Emblem: The Binding Blade, where its weight is a mere 10, so it can be doubled with rather easily.

The Thunderstorm tome, as it appears in the third series of the TCG.

Ishtore casting Thunderstorm on Larcei in Genealogy of the Holy War. 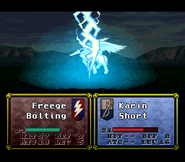 An enemy mage casting Bolting on Karin in Thracia 776.

An enemy Etrurian Sage casting Bolting on Roy in The Binding Blade.

An enemy Sage casting Bolting on Marcia in Path of Radiance.