-
[view]
“Dead warriors given free will by dark magic. They wield a variety of weapons.”
—In game description from Fire Emblem: The Sacred Stones.

The Bonewalker (スケルトン Sukeruton, lit. Skeleton in the Japanese versions) is an enemy-only Monster class that debuts in Fire Emblem Gaiden. As their name suggests, Bonewalkers are literally walking skeletons, wielding Swords, Lances and Bows as their weapons of choice. Bonewalkers are designed with a few ripped and tattered pieces of cloth draped over their skeletal bodies, most likely relics from their time as members of the living realm.

In their original inception in Gaiden, Skeletons are armed with Swords as their weapons of choice. They return in the remake, Shadows of Valentia, wielding the monster-exclusive weapon Bone Sword, occasionally equipped with a variety of Swords to increase their damage, most commonly Shadow Swords.

In TearRing Saga: Utna Heroes Saga, Skeletons only wield Swords in combat and possess low stats. They can be summoned as ally units with the Skeleton Staff.

In The Sacred Stones, Bonewalkers are among the most common and lowly classes of monsters. They appear in the first chapter that include monsters at a relatively low level. As their in-game description indicates, Bonewalkers can be found carrying a variety of weapons that include Swords, Lances and Bows. They also commonly carry rare weapons that are dropped upon their defeat; the Runesword, Lancereaver, Killing Edge, Spear and Axereaver are amongst the weapons that can be looted from them.

Bonewalkers are notably weak in all statistical departments. Like many other monster classes, they make up for their fundamental weaknesses by coming in much larger numbers than most enemies. They often have very low Hit Rates, a fact that limits the amount of damage that they can inflict. They also have very low strength, further reducing their combat effectiveness due to them inflicting little to no damage at all. Despite these weaknesses in fundamental areas, Bonewalkers have rather high Avoid, which allows them to evade attacks with relative ease as compared to other monster classes. 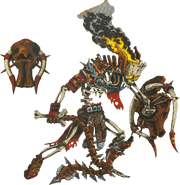 Concept artwork of the Bonewalker class from Echoes: Shadows of Valentia. 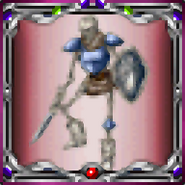 Generic class portrait of the Skeleton class from TearRing Saga.

Generic class portrait of the Bonewalker class from The Sacred Stones. 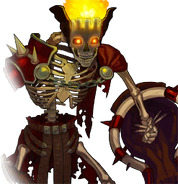 Generic class portrait of the Bonewalker class from Echoes: Shadows of Valentia.

Village sprite of a Bonewalker from Echoes: Shadows of Valentia.

Battle model of the Skeleton class from Gaiden. 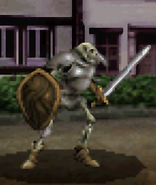 Battle model of the Skeleton class from TearRing Saga.

Attack animation of a Bow-wielding Bonewalker from The Sacred Stones. 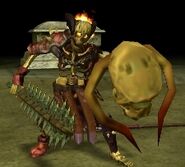 Battle model of the Bonewalker class from Echoes.

Map sprite of the Skeleton class from Gaiden.

Map sprite of the Skeleton class from TearRing Saga.

Map sprite of the melee Bonewalker class from The Sacred Stones.